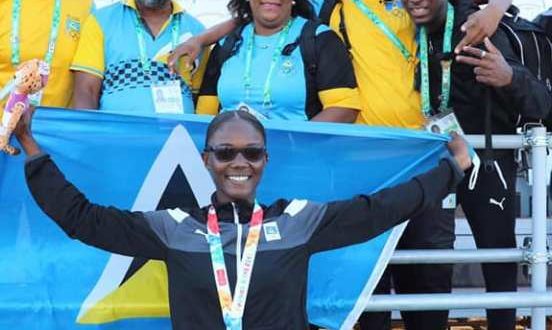 Alfred and the other members of the  team were met on the tarmac of the Hewanorra International airport before a welcome ceremony took place  at the airport lounge. Minister responsible for Youth Development and Sport Honourable Edmund Estephane  who was in Argentina to witness Alfred’s performance said he experienced  great team spirit at the games.

“In Argentina we had a team representing Saint Lucia. This is what you call a team. There was unity, there was encouragement, there was just this inner spirit, there was togetherness and I  commend the coaches and chef-de-mission  for a job well done, ” Minister Estephane said.

Acting Prime Minister Hon. Lenard Montoute was also present at the welcome and emphasized the magnitude of Alfred’s success.

“Your accomplishment Miss Alfred is a national achievement and I would like to say that  for us as a nation  we are very proud of you. We are also very proud of the performance of the other team members. While  the rest of you did not medal, you gave of your best and your performances were outstanding ,” he exclaimed.

Vice president of the Saint Lucia Olympic Committee Incorporated Lyndon Cooper  disclosed that the SLOC Inc. will continue to support athletes in a quest to bring more medals to the nation.

” We have always pledged our commitment to the continued development of the athletes. Sometime in 2016 the President of the Olympic Committee indicated  that she wanted to see more athletes stepping up  on the winners podium and that she was going to put in the necessary resources into these athletes, ” Cooper noted.

The welcome for Alfred and the Youth Olympic Games contingent culminated with a reception at  Government House. 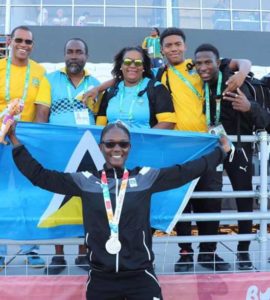