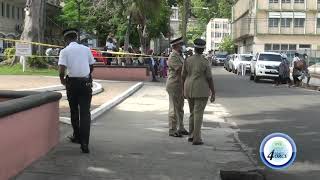 There was a heavy police presence as parliament convened to debate the extension of the state of emergency on Tuesday. The royal Saint Lucia police force in a Facebook post on Monday said that they were aware of a planned protest. But despite this report, there was no sign of a disturbance near parliament on Tuesday.