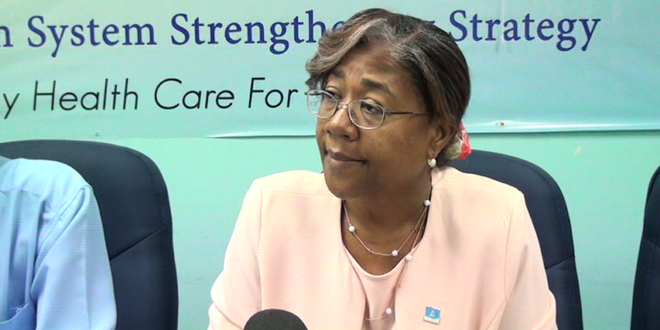 Health officials say they want to make two things clear – the Owen King EU Hospital will not be privatized and far from being shut down, the community pediatric programme will be expanded, along with services for special needs children.

The top brass of the Ministry of Health met with the press on Thursday [August 31st], to field questions on the most pressing issues in local healthcare. They also spoke of advanced plans to expand dialysis services.

News of health officials’ preparations for the move to the EC$167 million Owen King EU Hospital has been clouded by talk that there are plans to privatize the national health care institution. On Thursday, Minister for Health Mary Isaac sought to dispel those allegations.

She told a press conference that running the hospital will be a costly exercise and government will seek to find revenue streams to sustain operations, but has no privatization plans. Another healthcare related issue that has been in the public domain of late involves access to services by special needs children. [Watch video]

Dr. Fredericks says the Director of Child Health Services position is not presently funded, however the Community Pediatrician post has been filled.  The health officials say it was important to clear the air on those issues.

They are meanwhile urging members of the public to bear some more patience, as they prepare for the transition to the Owen King EU Hospital. While a time frame for the commissioning has not been disclosed, officials say so far, the ministry is on track with transitioning goals.