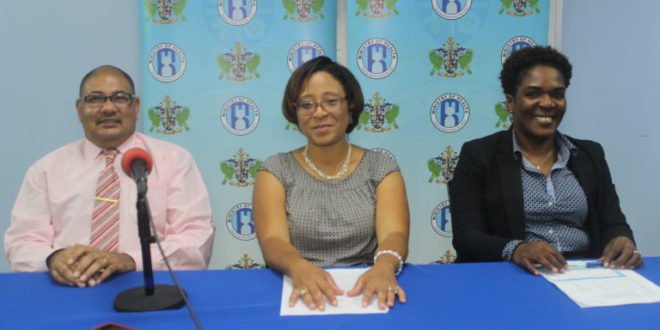 [Press Release] With the month of June signaling the commencement of the hurricane season the Ministry of Health launched its Vector Awareness Week of activities to sensitize and engage the public on the importance of source reduction as an effective means of vector control.

Vector Awareness Week was created after the passage of Hurricane Tomas in 2010 following the proliferation of the mosquitoes and rats on island. During the press launch of Vector Awareness Week on Tuesday 22nd May, Director of the Bureau of Health Education, Natasha Lloyd Felix explained the situation the Ministry of Health was faced with at that time.

“In that period we noted that there was a distinct increase above the normal threshold of our vector borne diseases which included dengue fever and leptospirosis. Noting that, we had to immediately action our teams into communities to respond to those spikes and to avert any possible intensification of the outbreak.”

She said Vector Awareness Week was one of the strategies employed to heighten awareness within communities while instituting measures to galvanize support for the implementation of source reduction techniques and to mitigate any potential outbreaks.

Ag. National Epidemiologist, Dr. Gemma Chery said her department collects data from all health facilities on emerging and reemerging diseases that are under surveillance within the country. She referenced the recent letospirosis trends.

Dr. Chery highlighted the actions individuals should take if they present with signs and symptoms of a vector borne disease.

Ragnanan added that the Environmental Health Department routinely checks mosquito eggs for signs of resistance to the insecticide being used.

“We find very often that people complain about insecticide being ineffective and what we found happening is because some of these insecticide have been used for long periods of time, for years, the mosquitoes have developed resistance and thereby the insecticide no longer works in terms of killing these vectors.”

He said this year’s Vector Awareness Week will place focus on four communities namely La Guerre, Anse La Raye Village, Pomme a community within Augier and Fond St. Jacques in Soufriere. Training will be conducted for forty council workers within the targeted communities in the surveillance and management of rodents. Clean up campaigns will be undertaken while the novel activity for this year will be a rat trap making competition.

“It is anticipated that children within the ages of 9-11 will engage in a competition of designing rat traps and that would be judged. The winner of the most innovative trap would be awarded a prize. “

The rat trap competition is geared towards making cost effective, innovative rodent control mechanisms. The Ministry of Health and Wellness calls on all citizens to play their part in reducing the impact of vectors on the population as both the mosquito and the rat can kill if not controlled.