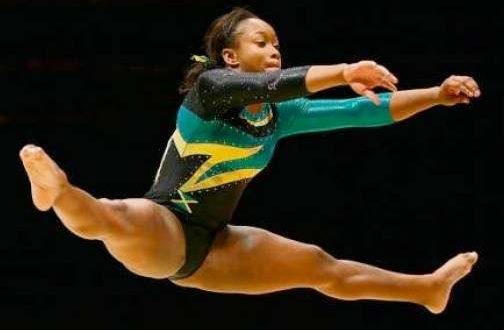 Jamaica Observer- Sherdon Cowan- Jamaica’s chances of parading Olympian Toni-Ann Williams at the Pan American Games next year has been dealt a big blow after the gymnast suffered a dislocated elbow during a training session on Tuesday.

Williams, 22, who had only recently recovered from an injury, was in preparation for the Pan American Games qualifiers to be staged in Peru when the incident occurred.

The American-based Artistic gymnast was initially listed as part of Jamaica’s nine-member team that would represent the island at the qualifiers scheduled for September 10-17, but with this setback, she will again be sidelined for another major championship.

Nicole Grant-Brown, president of the National Gymnastics Federation, who revealed the unfortunate news to the Jamaica Observer shortly after it occurred, lamented the setback.

“Toni -Ann just dislocated her elbow and is in the emergency room, so she won’t be able to do Pan Am, but we are hopeful that she will be available for the World Championships. This is definitely a major blow to the girls’ team and we are saddened by the news and truly hope she will recover in time for Worlds,” Grant-Brown said on Tuesday.

It will be the first time Jamaica will have two full senior teams represented at the qualifiers, as they hunt qualification to the 28th Pan American Games to be hosted in Lima, the capital of the South American nation.

The now eight-member team will have four females and four males in action with English-based Danusia Francis set to make a return to the national team for the first time since the 2015 World Championships in Scotland.

Other members of the female team are Maya Williams, Kiara Richmond, and Canadian-based Mackenzie Robinson, while English-based Reiss Beckford will lead the men’s team of Caleb Faulk, Steven Lewis and Nicholas Tai.

“Apart from the setback with Toni-Ann, I am very excited and proud that we will be sending two full teams and look forward to good performances, as we have very high hopes of qualifying for the Pan Am Games in 2019.

“Newcomers Kiara and Mackenzie, who recently turned seniors, had been training at the just concluded PAGU training camp in Dominican Republic, while the other members have been training at school and their respective gyms. So far their preparation has been good, especially for the college members who have been competing frequently during the National Collegiate Athletic Association competition and like I said earlier we have high expectations,” the president added.

Meanwhile, Francis, 24, who was a reserve athlete for Great Britain’s team at the 2012 Summer Olympics, expressed her excitement about being back in action for Jamaica.

“It feels good to be back and I’m excited to see how our team does. I don’t have any expectations in terms of results or scores because our team has not competed together before, but I hope this will be our strongest team performance yet in Peru,” Francis told the Observer from her base in Great Britain.

“I hope we can all go out there and put on an impressive show and make our country proud and it would be amazing if we could make the team final and qualify for the Pan Am Games next year,” she added.

Despite being away from competitive international action, the experienced Francis pointed out that she has kept on the move to maintain her form.

“I have been training hard at my gymnastics club and I have done a few competitions, so I think my experience will also help me out on the competition floor. My form is good as I have more skills in my routines now than when I was competing at college in the US, so I am excited to showcase my unique routines,” she beamed.