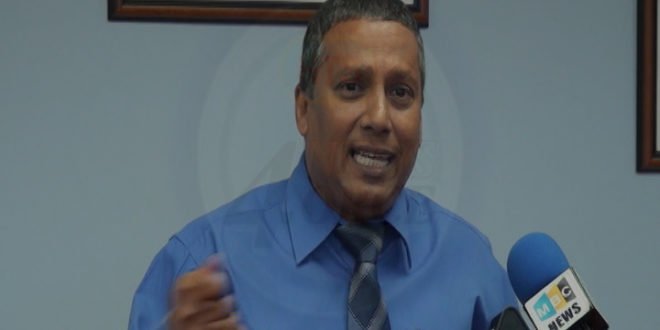 Minister for Economic Development and Acting Prime Minister Guy Joseph has hit back at derogatory platform comments made during a protest march in Vieux-Fort that was coordinated by the Opposition Saint Lucia Labour Party [SLP].

On November 26, the SLP led what the Party described as a national demonstration against government plans for alternative uses for the long-delayed St. Jude Hospital.

Speaking at a weekly press briefing on November 27, the Acting Prime Minister appeared to single out Julius James, one of the leaders of the local civil group known as the Vieux-Fort Coalition of Concerned Citizens for Change [VF4Cs] and SLP Senator Guibion Ferdinand. Ferdinand has been charged by the Economic Development Minister of spewing racial slurs during his platform speech when he allegedly referred to Joseph as a ‘coolie man’.

Minister Joseph told reporters that he was appalled at the racial taunts and accused Opposition MPs of having double standards – from Parliament discourse to platform rhetoric.

The Minister said the alleged racial abuse has struck a chord with the local Indian community. The Minister said he will continue to resist engaging in what he described as personal attacks whether in Parliament or on the stump. [Watch video]

A previous version of this report mistakenly mentioned Mr. Julius James as the individual who allegedly made the ‘coolie man’ remarks. HTS News4orce has verified and corrected the article.