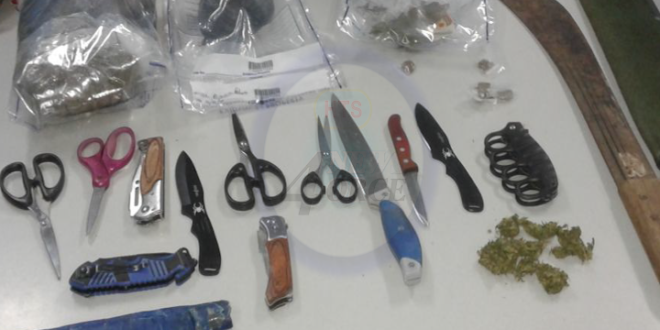 On Monday, January 15, 2018, a series of joint police operations were conducted simultaneously, in various communities in the Northern Division.

One such operation, was conducted was along the Millennium Highway, during which time, thirty nine (39) tickets were issued, one (1) stolen motorcar was recovered, five (5) motorcars and one (1) motorcycle were impounded.

Two (2) firearms: a .38 Revolver with five (5) rounds of ammunition and a 9mm Beretta with eleven (11) hollow point rounds, three (3) cutlasses, four (4) pairs of scissors, ten (10) knives, two (2) pounds of cannabis, and one quarter pound of cocaine were also recovered.

The other operations were conducted within the communities of Gros Islet and Babonneau. During the conduct of these operations, ninety one (91) tickets were issued for various traffic violations, nine (9) motor vehicles were impounded and a small quantity of narcotics was seized.

Resulting from these operations, a total of nine (9) individuals were arrested in relation to various offences along the Millennium Highway.

Ricardo Peterson of Ciceron, Castries and Eldon Palton of Jn. Baptiste Street, Castries, were charged with the offences of Possession of Controlled Drugs and Possession of Controlled Drugs with Intent to Supply. They were escorted to the First District Court on Wednesday, January 17, 2018, where they were each granted bail in the sum of $4000.00, cash or suitable surety.

Earlan Auguste of Entrepot, Castries, Kauda Tuitt of Goodlands, Castries, Jefferson Louis of Waterworks Road, Castries, Mark Grant of Bocage, Castries and Brad Armstrong of Ciceron, Castries were charged with the offences of Possession of Firearm and Ammunition. They were brought to the First District Court, where they were all remanded in custody, to reappear on February 15, 2018.

Junior St. Claire and Jn. Marie Pelage both residents of La Pointe, Dennery, were charged with the offence of Possession of Controlled Drugs. They are scheduled to reappear before the First District Court on March 2, 2018.

The Royal Saint Lucia Police Force wishes to thank the general public for their cooperation during the conduct of these operations and look forward to continued collaboration.