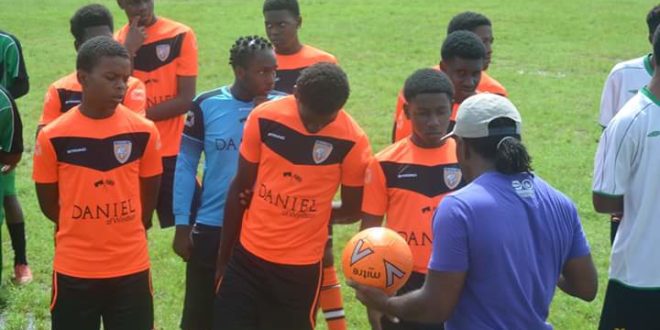 Press release- The Gros Islet Football League in collaboration with Aurelien Family hosted the 2nd Annual Aurelien Soles Under 18 Invitational Tournament at the Corinth Playing Field on Sunday 5th August from 9.00 a.m.  The Tournament featured 11 Clubs from as far as the South Castries basin. Clubs we seeded into two groups, A and B respectively.

The activity started off with match pass where all teams were represented. MrAurelien presented each club with an autographed match ball after which brief remarks were shared.

The 2nd game featured defending champions, Big Players vs Reduit FC.  Big Players took an early lead with a goal from Je NaieLesmond ending the 1st half 1-0.  The 2nd half saw another goal from Big Players when Cyrus Hubert worked one to the back of the net ending the game with Big Players winning over Reduit FC 2-0.

The 3rd game featured VSADC vs TI Valley.  No goals were scored in the 1st half as both tried to secure 3 points.The 2nd half saw VSADC playing attacking football which allowed them to take the lead with a well worked goal from Akil Gabriel. What maybe the goal of tournament came from the boot of RijkardGlasglow from 40 yards away ending the game with VSADC winning over Ti Valley 2-0.

The 4th game featured Big Players vs Pioneers FC.  This game was a real test for the defending champions as they came head to head with a very organized Pioneers FC. Big Players had at least seven (7) shots on target but the Pioneers Goal Keeper matched all seven earning his a needed point inn this encounter. Game ended 0-0.

The 5th game featured Northern United vs GMC United. The rivalry of these two teams go way back hence promised to be a thriller. Northern United showed they class and pace very early earning them a goal in the opening five minutes of play. Goal was scored by national U20 player Daniel Biscette. But with GMC also having many national players on the field of play it was not going to be an easy game for Northern United. GMC’s Captain TyreceJeremie equalized in the dying minutes of the first half.  The 2nd half saw a penalty goal from Northern United’s captain Samuel Lawrence ending the game with Northern United winning over GMC United 2-1.

The 6th game featured Reduit FC vs New Generation. Reduit held a more defensive stance inn this encounter, attempting to play counter attacking football as New Generation came out to achieve 3 points. Reduit’s goal keeper ensured that his team went into dressing room on level terms with opponents.  No goals were scored in the 1st half.  The 2nd half saw a different New Generation adjusting their shape and allowing their better players free will upfront. National Players Bertley Marcelle and Yanic Noel create many chances with an eventual goal from Bertley Marcelle to break the deadlock. Yanic Noel made it 2-0 then 3-0 respectively to end their campaign for the day on a high. New Generation winning over Reduit FC 3-0.

The Competition will continue on Tuesday 7th with 2 games featuring Big Players vs New Generation and 3.00pm and TI Valley vs GMC United at 4.00 pm at the Corinth Playing Field.