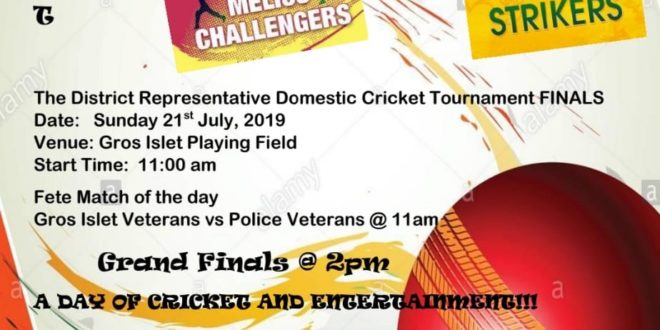 GRAND FINALS OF GROS ISLET DOMESTIC 50 OVER TOURNAMENT THIS SUNDAY

The Grand Finals of the 2019 Gros Islet Domestic 50 Over Cricket Tournament will take place at Gros Islet playing field this Sunday July 21st 2019. 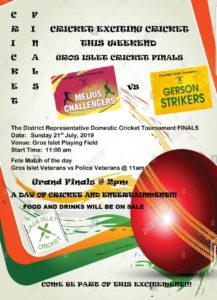 A T20 friendly will be played prior to the start of the finals between the Gros Islet Veterans Cricket Team and the Police Veterans from 11:00am.

Defending champions Gerson Strikes will take on the Melius Challengers from 2pm.

Captain Simeon Gerson recorded a half century and took 4 wickets for his team in the semis. He will be supported by Lee Solomon, Jamaal James, Dornan Edward and Ackeem Auguste.

U19 West Indies cricketer, captain Kimani Melius recorded 120 runs, the highest score in the tournament so far. He will be joined by Dominic Auguste, Tonius Simon, Sanjay Hayle and Zaida James.