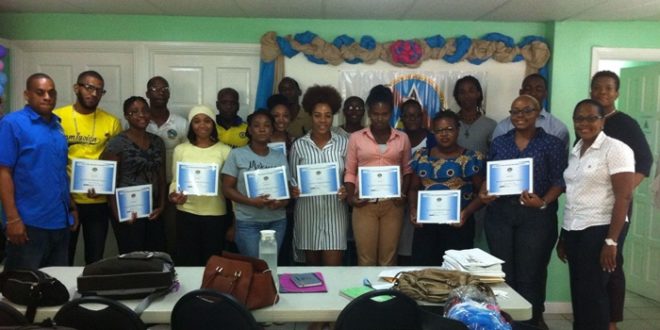 A flagship activity of the St. Lucia Chamber of Commerce Industry & Agriculture the Celebration did not fall short of expectations and featured over 10 activities supported by more than 50 partners.

The celebrations kicked off with the announcement of the 2017 DECA Idea Challenge Mystery Item being announced via GEW’s website at on Sunday 12th November at 4:00 pm. Over the next eight days students teams from across the island were challenged to transform Rubber Bands into a useful product. All schools were engaged through the Ministry of Education and encouraged to participate in this competition.

The forum allowed over 60 entrepreneurs to engage with professionals in the fields of Law, Marketing, Information Technology, Digital Marketing, Business Registration, Accounting, Customs, Finance, Human Resource and Business Management. Hosts for the event recorded an increase in participation and that the forum did provide the opportunity for valuable information to be acquired.

In his address to the audience, Honorable Guy Joseph reiterated the need for entrepreneurs to conduct more trade locally and support their fellow colleagues in business. He further expounded on his journey as an entrepreneur and the importance of commonsense when conducting business.

The evening continued with inspiring words from Young Entrepreneur of the Year 2016 Johanan Dujon and Bernise Doxilly Proprietor of Green Grocer who shared a testimonial of her experience in the forum from the previous year.

The proceedings ended with a cocktail, allowing persons present to continue the networking and information sharing throughout the night.

In similar fashion the Sir Arthur Lewis Community College continued their observance of Global Entrepreneurship Week starting off with their motivational session for the student populous on Monday 13th November 2017. Over One hundred (100) Students of the Business Department among others were engaged with Samuel Lubin of KL Productions & Arthur Allain 2017 Groovy Soca Monarch.

Presenters were able to share about their journey, provide insight into what it takes to become an entrepreneur and provide some advice and encouragement to members from the audience who wanted to pursue an entrepreneurial journey.

Celebrations continued on Tuesday 14th November 2017 with the college’s newly rebranded IGen (Idea Generation) competition. Student teams from all departments were challenged to present a business proposition and viable prototype in preparation for the competition.

An overwhelming 40 submissions were received. These submissions underwent two rounds of adjudication first being shortlisted by the faculty of the Business Department. A total of 18 businesses emerged as finalists of the competition and proceeded to present before a panel of judges. The panel included Dean of the Division of Technical Education & Management Studies Kirt Harris, Executive Director of the St. Lucia Trade Expot Promotion Agency (TEPA) Jacqueline Emmanuel Flood, Manager of Beacon Insurance Joralia St. Louis & Program Officer of the St. Lucia Youth Business Trust Wilton Jeremie.

Following an exhilarating afternoon of presentations the judges dialed down to the grueling task of selecting the three best businesses based on presentation, viability and feasibility and also selected three winners in the categories of Social Consciousness, Investment/Scalability & Creativity/ Innovation.

Post – Emergency Safety Kit (PESK) emerged as winner of the competition with emergency solar powered kit, Minty who presented a medicated stress & pain relief pad came in second and coming in third was Herbal Sensations with herbal inhalers and air fresheners. The finalists were awarded cash prizes of $500 Ec, $300 ec and $200 Ec respectively and a trophy.

TEPA & Beacon Insurance sponsored the trophies and cash prizes for this event.

Celebrations at the Sir Arthur Lewis Community College came to a close with an Exhibition held at the Division of Technical Educational & Management studies Carpark. The Showcased featured over 20 groups who displayed businesses ranging from edible products, to hair gels, face creams, bath soaps and crochet items among others.

Businesses were from all the school’s departments. Sponsors for this event were FLOW & WLBL.

The workshop concluded with a visit to St. Lucia Distillers to view the processes and procedures employed by the organization to maintain standards. A total of 18 individuals participated in the workshop facilitated by Mrs.

Participants received certificates of participation upon completion of the workshop.

The James Belgrave Micro Enterprise Development Fund joined in the celebrations by hosting two events. One was an internship program for a past student of the Sir Arthur Lewis Community college for the entire week at their offices.

The intern was able to better understand the workings of the Fund and how the organization sought to assist entrepreneurs in St. Lucia. Belfund also hosted a Small Business Development Workshop from Wednesday 15th November 2017 – Friday 17th November 2017.

A total of 16 entrepreneurs were equipped with skills in costing and pricing, business management and entrepreneurship. Following the 3 – day workshop participants were awarded certificates and follow-up opportunities from Belfund.

Participant Shaquelle Brouett applauded The Belfund for their efforts and remarked that the workshop did prove beneficial to her business and encouraged other young entrepreneurs seeking support to reach out to the organization.

Over sixty (60) entrepreneurs were in attendance at the event and echoed the relevance of such an activity and continued to applaud the St. Lucia National Youth Council. Many participants indicated their interest in follow-up events or symposiums in various sectors of entrepreneurship.

The department of Sustainable Development partnered with Global Entrepreneurship Week to present their Private Sector Energy Awareness Fair. The fair is a project by the Department geared towards equipping the public with the awareness of products and services available to them within the renewable energy space.

KL Productions of Dennery hosted a Poetry Contest & Gospel Concert to close of GEW 2017 on Sunday 19th November 2017. The event was hosted at Chateau Heritage and featured over 20 local artists and poets.

The event sought to again raise the spotlight on creatives within the island and provide them an opportunity to showcase their talents and share their creativity.

The event was attended by over three hundred persons and sponsored by The Print Factory, SwiftPac & the Ministry of Youth Development & Sports.