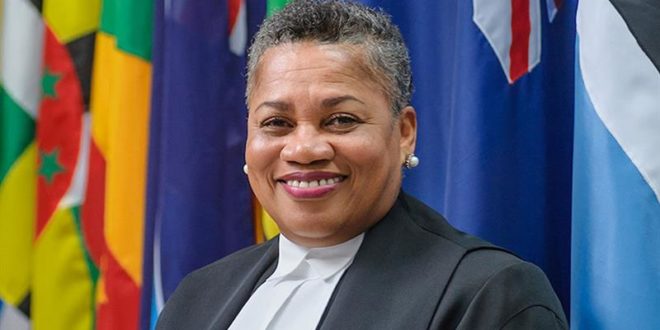 The ECSC formally opened its 50th Anniversary Exhibition at the Castries City Hall on Monday, Oct. 9.

Chief Justice, Her Ladyship Hon. Dame Janice M. Pereira, described the exhibition as a unique opportunity to fully appreciate a remarkable institution that has diligently served the citizens of the Eastern Caribbean.

“The Eastern Caribbean Supreme Court (ECSC), is an example of the power of the people of the region, and a demonstration of what can be achieved through collective efforts,” she said.

The Chief Justice noted, however, that the public had little knowledge of the workings of the court, and viewed the exhibition as an avenue to provide some education and enlightenment on how the court functions.

“In light of this, many of the court’s celebratory activities have been focused around raising awareness of the court and its role in society,” she explained. “This exhibition is meant to continue this focus by providing a visual showcase of the courts history, the headquarters of the court in Saint Lucia; the various High Courts throughout the courts member states and territories; and the overall role that the court plays in the administration of justice in the OECS sub-region.”

Also present at the opening ceremony, was the President of the OECS Bar Association Thaddeus Antoine, who stressed the importance and value of continuous education on matters of the law, both on the part of the judiciary and the public in general.

“I invite the public over the next five days to attend this exhibition to get acquainted with law, the judiciary, and the workings of the law.”

The exhibition will run from October 9 – 13, and will showcase all the former Chief Justices of the ECSC. A special corner has been dedicated to the late Sir Vincent Floissac, a former Chief Justice and President of the Court of Appeal of the Eastern Caribbean Supreme Court.

The Exhibition is being mounted in collaboration with the OECS Commission, The Eastern Caribbean Telecommunications Authority (ECTEL) and the Saint Lucia Diabetes and Hypertension Association (SLDHA).