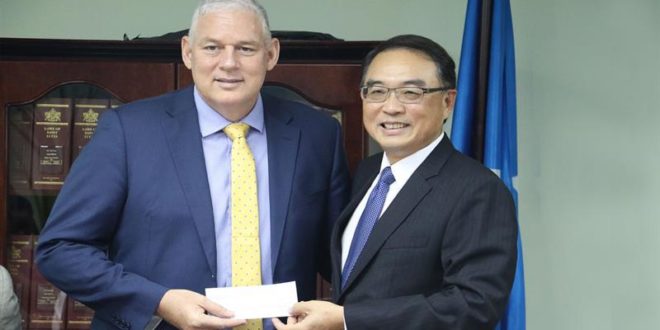 The Government of Saint Lucia continues to see Information Communications Technology (ICT) as one of the most significant drivers of sustainable growth and development and is committed to ICT as a focal point of our country’s development strategy.

This week the government moved a step closer to achieving a modern and globally competitive nation with the funding of a Multi-Channel Data Centre (MCDC) by the Republic of China (Taiwan). The program facilitates the adoption of a common ICT infrastructure and architecture within the government and promotes ICT as a driver for social advancement and economic growth. It will facilitate multi-channel service delivery such as the internet, mobile phones and the conventional telephone and is an integral part of the anytime, anywhere, any channel service delivery.

At a brief ceremony at the Office of the Prime Minister on Aug 22, His Excellency Douglas Shen, Ambassador for Taiwan to Saint Lucia, handed over a cheque for EC$1.3 million towards the project.

On behalf of the people of Saint Lucia, Prime Minister and Minister for Finance, Economic Growth, Job Creation, External Affairs and the Public Service, Hon Allen Chastanet, thanked the ambassador and the Taiwanese government for their continuous support to Saint Lucia.

The prime minister noted that the particular project was long overdue for modernizing the public service.

“There is a smarter way to run government. There is a more efficient way of running government,” said the prime minister. “There is too much work we are continuing to do that is redundant work where people don’t feel empowered. More importantly, we must deliver meaningful service to people. This component of the cheque contribution is essential to furthering our cause. We are working diligently to ensure that by the time we go into the next budget that we see an impact on the bringing together of government and the access of information. This is going to make a significant contribution in making our country more competitive.”

The prime minister also noted that when it came to the “Ease of Doing Business” report ranking for Saint Lucia “many of the problems that still plague us are because we are not digitized and we don’t have an integrated computer system.”

Said the prime minister: “People should be able to access information more readily online. There are so many areas in which IT can make this government and this country more efficient which will redound to the benefit of the citizens of Saint Lucia.”