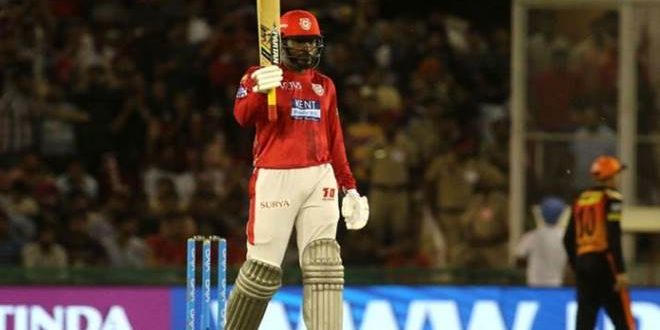 JAIPUR, India (CMC) — Superstar Chris Gayle was restricted to single digits for the second time in as many innings as his Kings XI Punjab crashed to a 15-run defeat to Rajasthan Royals in the Indian Premier League here on Tuesday.

Chasing 159 at Sawai Mansingh Stadium, Kings XI were held to 143 for seven off their 20 overs to lose their fourth match of the season, but remain third in the standings.

The 38-year-old Jamaican, who started the tournament on fire with three half-centuries and a hundred in his first five innings, was dismissed for one to follow up his eight also against Royals on Sunday.

Gayle fell at the end of the second over, missing a charge at off-spinner Krishnappa Gowtham and going stumped down the leg side.

Fellow opener Lokesh Rahul struck a superb unbeaten 95, but Gayle’s dismissal triggered a stunning batting collapse as wickets fell steadily to leave the visitors on 81 for six in the 14th over.

All told, Rahul struck 11 fours and two sixes, posting 46 for the seventh wicket with Australian Marcus Stoinis, who was the only other batsman in double figures with 11.

Barbadian fast bowler Jofra Archer, who shared the new ball with Gowtham, finished with one for 32 from his four overs.

Earlier, England’s Jos Buttler struck 82 from 58 balls as Royals, opting to bat first, got up to 158 for eight off their 20 overs.