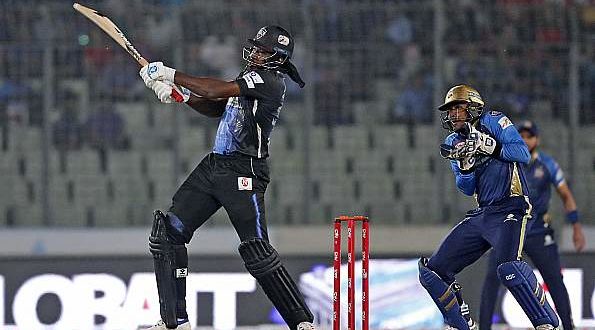 The left-handed Gayle, who only arrived last weekend, pummelled 51 from 28 balls in a Man-of-the-Match performance as Riders, sent in by the league leaders, were dismissed for 142 with a ball to spare at the Shere Bangla National Stadium.

Gayle dominated a 36-run opening stand with New Zealander Brendon McCullum (6) and a further 35 for the second wicket with Mohammad Mithun (22), to keep the innings going.

The Jamaican had belted five fours and four sixes when he perished trying to find another boundary, holing out to deep midwicket off off-spinner Mosaddek Hossain in the eighth over.

West Indies off-spinner Sunil Narine finished wicket-less from four overs which cost 29 runs and then suffered a one-ball ‘duck’ when he fell to the second ball of the Dynamites reply, edging pacer Mashrafe Mortaza behind with two runs on the board.

His opening partner and fellow West Indies and Trinidad and Tobago teammate, Evin Lewis, struck three sixes in 28 off 25 balls, adding 44 for the third wicket with Jahurul Islam (29).

Dynamites then lost wickets at key stages, but entered the final over requiring 10 runs for victory with Pollard at the crease.

The Windies all-rounder was kept scoreless from the first two deliveries before depositing the third ball from pacer Thisasa Perera over the ropes at long on, leaving Dynamites with just four runs to get from three balls.

However, Pollard was kept scoreless off the fourth ball and yorked by the fifth, and last man Abu Hider was bowled by a full toss off the last ball, to give Riders a nervy win.

In the preceding game, the former Barbados and West Indies opener Smith top-scored with a superb 62 off 36 balls as Kings rallied to a competitive 166 for eight off 20 overs, after being sent in by Khulna Titans.

The right-hander struck seven fours, four sixes and helped rescue the innings in a 76-run, fourth-wicket stand with Mushfiqur Rahim after Kings found themselves in disarray at 21 for three in the third over.

In reply, West Indies players Chadwick Walton (4) and Carlos Brathwaite (12) both failed, but captain Mahmudullah hit 56 and Ariful Haque, an unbeaten 43, to see their side home with four balls to spare.