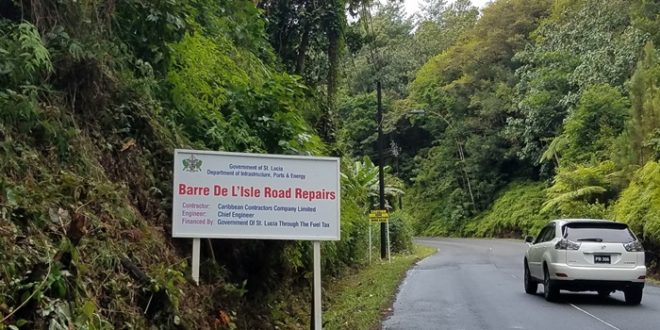 [Press Release] The application of the fuel tax by the Government of Saint Lucia, has begun to bear fruit to the benefit of taxpayers, particularly motorist.

Many major roads around the island are being fixed through funding from the fuel tax. These include the Barre De Isle and the Vanard/Millet roads.

The Department of Infrastructure Ports, Energy and Labour is announcing that many more roads are now scheduled to receive attention because of the fuel tax.

He says the injection of the fuel tax will help address the dire need for road repairs around the country.

In the short to medium term several roads are earmarked for major repairs – which circumferences the island, emanating from Castries in the North, to Anse La Raye to Vieux Fort in the South and through Dennery and beyond.

The Government of Saint Lucia will fix over 100 kilometers of roads using the fuel tax in the coming months.