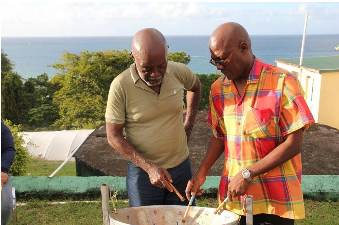 (PRESS RELEASE) – Gandolph “Abbeystone” St. Clair born April 3rd 1951 has died. He passed away at the Victoria Hospital after a brief illness on Sunday February 11th.

A native of Vieux Fort, he won a UNESCO bursary in 1979 to attend the Jamaica School of Drama, where he majored in Directing. His numerous credits include his own plays One Love, Guess who came to visit the Doctor, The Hustlers, (a one act play written with Robert Lee, and directed by Hayden Forde which has been twice staged (2003 and 2005).

He also directed in Jamaica, Sir Gawain and the Green Knight; Kendel Hippolyte’s Drum maker, Errol John’s Moon on a rainbow shawl, The Harrowing of Benjy by Roderick Walcott among other Caribbean and international plays. He worked with well-known Caribbean playwrights and directors like Derek Walcott, Dennis Scott and Rawle Gibbons.

He was an accomplished actor, performing roles in Lorraine Hansberry’s Raisin in the sun; Julius Caesar; he gave a memorable performance as Dessalines in stage and film versions of Derek Walcott’s The Haytian Earth, among others.

In 1999 Gandolph St. Clair wrote and directed ‘A Twist In Time’, a forty three minute film, which has been shown locally and in St. Maarten at the Soulaiga Film Festival. He also wrote and produced the Radio Play “1+1+1” for Saint Lucia’s 15th Independence Anniversary.

In the mid-seventies, he was a popular radio announcer on Radio St. Lucia and was known for his popular tag-line, “Gandolph St. Clair, the man in the chair, the voice in the air.”

He worked for many years at the Cultural Development Foundation, where he was Director of Carnival and was primarily responsible for the development of community carnivals. He travelled often to the French Caribbean islands to participate in their carnivals.

He also served as the CDF’s representative on the Nobel laureate Week Committee where he was responsible for organization of the annual Derek Walcott lecture.

In 2013 he was field producer on the film “Poetry is an island, a documentary on Derek Walcott, directed by Ida Does.

Gandolph was a singer and song writer working with musicians like Mervyn Wilkinson, Charles Cadet, Lennie Stone, the group Survival and folk groups like The Helenites and Hewanorra Voices. His hit songs included “Let’s start a revolution” and “Love me.”

In April 2014 the Central Library of Saint Lucia honored Gandolph St. Clair for his invaluable contribution to the Literary Arts in Saint Lucia. In 2015 as part of the 36th Independent Anniversary celebrations, he was awarded the Saint Lucia Medal of Merit GOLD for long and dedicated contribution in the field of Culture and the Arts.

In 2016 he published his final book THE CALABASH TREE a collection of poetry, prose and drama.

In March 2017 the Saint Lucia Writers Forum hosted Gandolph in the Laureate’s Chair.

The Monsignor Patrick Anthony Folk Research Centre extends its condolences to his family and joins with the arts and cultural communities in mourning his passing.