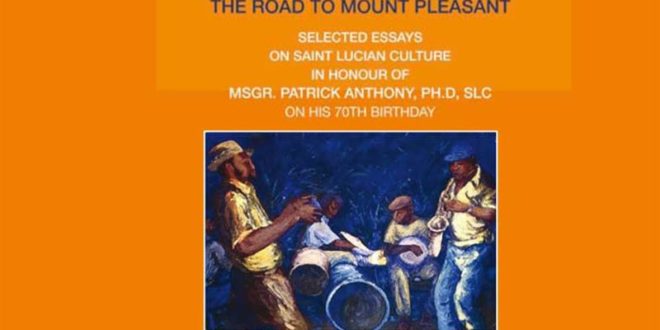 GIS – THE PUBLICATION CONSISTS OF POEMS ON VARIOUS ASPECTS OF SAINT LUCIAN CULTURE.

A significant achievement for the FRC, “The Road to Mount Pleasant” is a commemorative handbook in honor of Msgr. Patrick Anthony, the founding member of the Folk Research Centre. The publication consists of poems on various aspects of Saint Lucian traditional and contemporary culture.

“In 2017, Paba turned 70 and the FRC is pleased to honor him with selected essays that form a handbook of Saint Lucian culture. Many of the articles are written by him but there are offerings from other Saint Lucian intellectuals including our own Dame Pearlette Louisy, Governor General of Saint Lucia, and long-time colleague of Paba. My hope is that this handbook to Saint Lucia’s culture, recording as it does the “Road to Mount Pleasant” the home of FRC, and all it represents will become required reading for all who are interested in our life and culture and above all for our young Saint Lucians.”

Msgr. Patrick Anthony was present at the book launch and took the opportunity to autograph several copies of the publication. However, before the curtains came down on the event, the ever exuberant Paba called on the FRC to reach out to the youth.

“FRC should not be about old men like me. We have done our work, and I have been saying to the board and the leadership of the FRC and to Mr. La Force, that we have so many children who come here all the time for sessions. These must become members of FRC, they must be the future of FRC.”

The book was edited and compiled by John Robert Lee and Embert Charles, a Saint Lucian poet and the first Executive Director of the FRC respectively.

“The Road to Mount Pleasant” is available for purchase at the Monsignor Patrick Anthony Folk Research Centre.