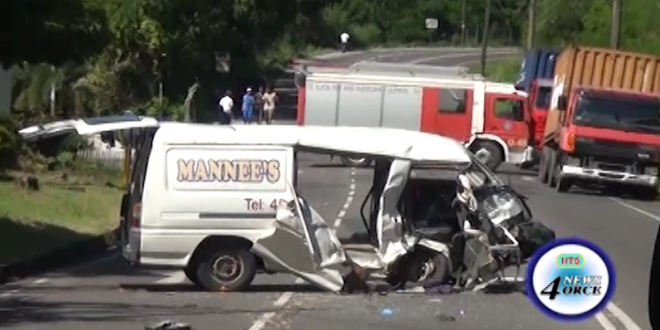 Four people were reportedly hospitalized in serious condition at Victoria Hospital after a collision between an ambulance and a Manees Bakery delivery van on Saturday afternoon.

The crash reportedly took place around 12 noon on the choc high road on the three-lane slope near the St. James Club Morgan Bay Resort.

Two emergency response personnel from the fire service and a patient are among the injured.

The driver of the bread van is the other accident victim.

Preliminary reports indicate that first responders from the fire service were ferrying a patient to hospital when the ambulance collided with the delivery van.

The ambulance was sent hurling into nearby bushes upon impact.

The two vehicles were badly damaged, and the occupant of the delivery van was trapped inside the vehicle.

Specialized equipment had to be used to free the accident victim. He was reportedly bleeding profusely.

Traffic on the busy thoroughfare was backed up for miles in both directions-from choc to Gros Islet in the north and Choc to Castries in the southbound lanes.

Details are murky but according to initial reports, the ambulance was southbound and the bread van was headed north.

We will have further updates as they come to hand, stay tuned.