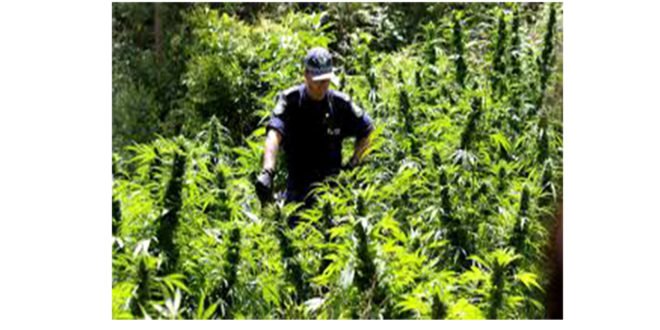 Officials at the Forests and Lands Department have cautioned that marijuana cultivation is endangering Saint Lucia’s forest reserves.

Research Officer, Karl Augustine, said the impact of the cultivation of marijuana in the island’s forests has multiple negative effects.

“The production of marijuana is one of the biggest risks we have to our forests,” he said. “Because of its [illegal] status and the need to hide it, the guys go into the forest to plant, but the damaging effect is threefold.”

Mr Augustine explained that water sources become contaminated and virgin forests destroyed as a result of the illegal activity.

“First, they go to areas that consist of virgin forests with trees that are two or three hundred years old, girdle them, and kill those trees. Second, they set up their plantations near a source of water that will help with their irrigation, but these are also the sources from which we tap water for our consumption. They utilize agro chemicals, and there is also the issue of getting rid of waste—both human waste and the waste associated with their actions.”

Another damaging effect is shifting cultivation.

“The department works with law enforcement to eradicate [marijuana plantations], but by so doing we promote shifting cultivation because the guys pick up their establishment from one place and they move somewhere else and repeat their actions,” he elucidated.

While the forest reserve is mostly secure, forestry officials say that there are patches of areas that are threatened. The Forests and Lands Department continues to maintain efforts at forest protection and surveillance, via an established and active surveillance unit.