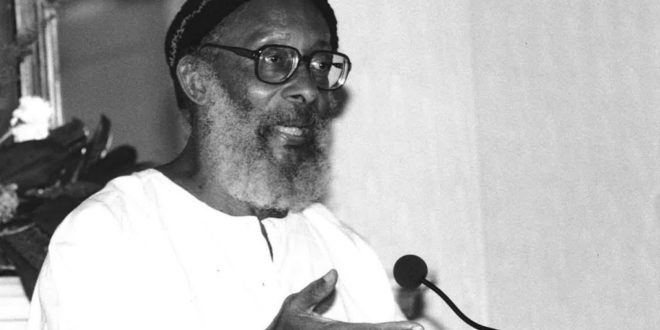 Castries, Saint Lucia, February 5,2020: The Monsignor Patrick Anthony Folk Research Centre
(FRC) joins the world in mourning the loss of an irreplaceable Caribbean Icon, Edward Kamau
Brathwaite. Brathwaite is the acclaimed father of ‘nation language’, who in the quiet of his years
instilled in his people a sense of dignity and pride to walk upright.
Teacher, Caribbean Nationalist and International poet, Kamau blazed the trail along with such
other notables as George Lamming, Austin Clarke, Derek Walcott, Martin Carter, Wilson Harris,
Roger Mais, Una Marson, Paule Marshall and Elma Napier, to place the literature of this region
on its pedestal where it sits today. In addition, Brathwaite’s work on nation languages gave
some additional legitimacy to Kwéyòl as the Saint Lucian nation language, which stands side by
side with other nation languages such as Jamaican Patwa, Bajan, and Sranan Tongo.
As a poet, Kamau was an adventurer in the classic sense who broke down established structures
in syntax and barriers to our mother tongues to expose a unique colour of saying that is
Caribbean in texture. He disjoined the present from past and weaved them back seamlessly
together again. From his first collection “Rights of Passage” (Oxford University Press 1967) he
displayed the dexterity of seeing the world in two lights; 1) through the colonizer’s educational
style and 2), through the eyes of his island people. Brathwaite also served as Resident Tutor of
UWI Extra Mural Department in the early 1960s.
The FRC also pays tribute to Brathwaite’s work on the survival of African cultural forms in the
Caribbean which has continued to inspire the work the Caribbean creative, artistic and academic
community as well as organizations like the Msgr. Patrick Anthony Folk Research Centre. Along
with our other Caribbean groups and nations, in particular Barbados, the FRC extends heartfelt
sympathies to the wife and family of Mr. Brathwaite.