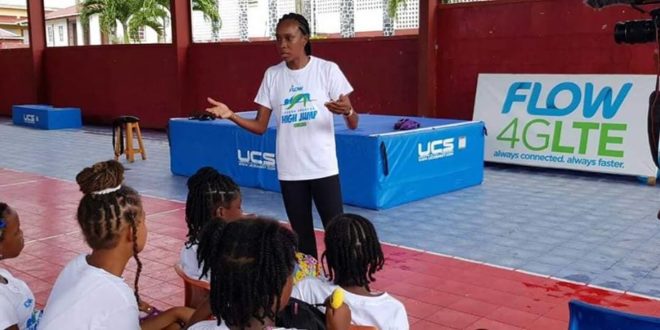 Castries, Saint Lucia (October 25th, 2018):  Saint Lucia and the Caribbean’s high jump queen, Levern Donaline Spencer, has had one of the most outstanding years of her storied career in 2018. The CARICOM record holder has won gold medals at the Commonwealth Games, NACAC Championships, and CAC Championships.

On Saturday, the island’s first and only Olympic finalist ever took up a new challenge, imparting her years of experience at the highest level of the sport to dozens of eager, up-and-coming student athletes. Ranging in age from nine to 16, none of these young ladies was even born when Levern began her glittering career in 1999.

The first-ever Flow Levern Spencer High Jump Clinic was an initiative of Levern’s sponsor, Flow, Saint Lucia and the Caribbean’s leading telecommunications provider. The company worked closely with the Saint Lucia Athletics Coaches Association, which took charge of the execution of what turned out to be a fruitful event.

The developing athletes and their physical education teachers not only got a chance to meet Levern herself, but they were introduced to the fundamentals and finer points of the high jump, working with some of the nation’s top coaches. The five-hour session took place at the Jumps Centre, an indoor facility located in La Clery.

The participating athletes, including several of the most promising young jumpers on island, took in what the region’s foremost proponent of the event had to say. She encouraged them to work at their craft, and to seek every opportunity for getting better, with the ultimate goal of flying the Saint Lucia flag in international competition.

“It was just great to see these girls having fun, just getting on the mats and jumping. We need a lot more of that, whether it’s the Coaches Association, the Ministry, or whoever. This clinic has been a long time coming, but I am so thankful to Flow for making it happen. They have been so supportive of my hopes and dreams over the years, and who knows, they may have helped the next great Saint Lucian high jumper move forward on her journey with this clinic. I have been able to get so much from this sport, by the grace of God, and I am just grateful that I am able to give back to the next generation with events like this one.”

Levern has been a Flow brand ambassador since 2009, and she was featured in the company’s Caribbean coverage of the 2016 Olympic Games.