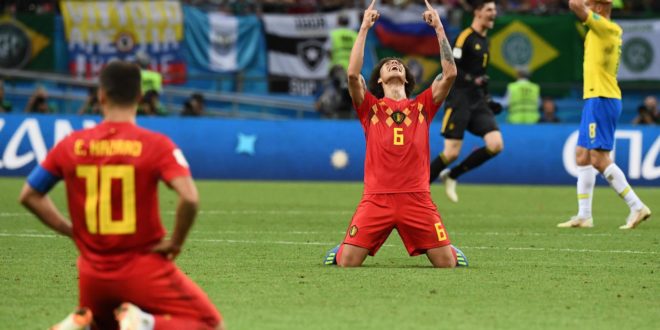 France are now into the semi final round of the FIFA World Cup for the first time since 2006. Varane and Griezmann’s goals in the 40th and 61st minutes were enough to put an end to Uruguay’s World Cup campaign.

On the other hand, 5 time winners Brazil are out after a surprising defeat by Belgium. This is the first time Belgium have reached the semi final round since 1986.

Fernandinho (Brazil) made an own goal in the 13th minute, while De Bryna scored in 31st for Belgium. Brazil’s Augusto scored for his team in the 76th, ending the game 2-1.

The South Americans became the latest heavyweight to depart the competition after holders Germany and other past winners Argentina, Spain and Uruguay.

On Saturday, Sweden and England will face off in a quarter final match at 10am. Then at 2pm, hosts Russia will take on Croatia.

Who do you predict will make it into the semis? Tell us your thoughts in the comments!