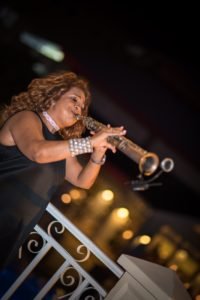 [Press Release] Jazz music may be a male-dominated world, but jazz would not be what it is without the unique and powerful voices, and personalities, of many female vocalists.

Nina Simone, Billie Holiday, Cassandra Wilson, Dianne Reeves: there are so many outstanding female jazz singers who belong to any Jazz Hall of Fame, sharing their messages of love, resistance, hope and humanity through unforgettable songs.

There is no doubt now that a new jazz wave has emerged – a growing movement led by artists who feel empowered and are inspired by the reality of the times, especially in the United States, and who sing and play first and foremost for, and on behalf of, their communities, unapologetically. Female vocalists are at the forefront of that movement, in the US, in the Caribbean and in the UK, and six outstanding women singers of this new generation are featured this year at the Saint Lucia Jazz Festival.

“My intent is to use music to uplift my people and to uplift myself,” says Lalah Hathaway, who feels that “music is a mode of resistance”. Hathaway, who performs two sets on the evening of Friday, May 11 at the Royalton, is a three-time Grammy winner: in 2014 for Best R&B Performance along with Snarky Puppy; then 2015 for Best Traditional R&B Performance, along with Robert Glasper and Malcolm-Jamal Warner for “Jesus Children;” and, again, in 2016 for the cover of her father’s 1972 hit “Little Ghetto Boy”.

Caribbean sounds, songs and rhythms are also featured in the 2018 edition of the festival, especially with Zara McFarlane, the foremost Black Jazz vocalist on the buoyant UK jazz scene. McFarlane was born in London, but, clearly, “[she] belongs to Jamaica, as the land of her mother and father is written in her soul and vibrates through her music.” Her latest album “Arise” has received much acclaim, and she is currently on a tour of European cities that will culminate with her performance in Saint Lucia on May 9.

Haitian Pauline Jean brings Caribbean sounds, feelings and landscapes to her performance. Her music creates an erudite blend of worldly jazz that draws from her Creole roots and integrates modern and traditional inflections. In this edition of the Festival, she will join Saint Lucia’s finest, Luther Francois, Arnaud Dolmen, Cameron Pierre and others to show that Creole Jazz is thriving in the Caribbean.

Other original and exceptional voices featured at Saint Lucia Jazz 2018 are Carolyn Malachi who, on Friday, May 11, will offer her reggae and hip-hop-infused jazz influences, melding African rhythms with American soul; and Grammy-nominated Jazzmeia Horn, described as a stand out singer “because she takes on every song she sings so naturally. Jazzmeia is a performer for whom every word, gesture, and ornament becomes an expression of her total conviction and she completely comes alive in the moment.”

On Sunday, May 13 at the Pigeon Island National Landmark, another outstanding vocalist, Avery*Sunshine, will take the festival to a new dawn with her trademarked thunderous, gospel-bred pipes and heart-to-heart content.

Avery*Sunshine exploded onto the scene with her 2010 self-titled debut album. Fluent in many musical languages from soul and house to classical, jazz and hip-hop, Avery*Sunshine expresses with a voice that speaks boldly and tells a uniquely familiar story: a story about love, healing and finding the newness of oneself – a fitting message for a Mother’s Day extravaganza.

All these exceptionally talented women are also social activists and philanthropists in their own right: Lalah Hathaway is one of the National Ambassadors for a campaign that aims to educate, empower and mobilize the African-American community in the fight against breast cancer. She is also an advocate for children of colour learning music: “Music is a super mutual collaborative effort and situation. It’s a conversation, not a monologue,” she says.

Meanwhile, Pauline Jean travels to Haiti annually with a group of musicians as part of the Experience Ayiti Mission, to provide aid, master classes, free concerts, and instrument distribution throughout different regions of the island; and Carolyn Malachi advocates for equal access to education and technology, contributes lifestyle articles to Black Enterprise Magazine and conducts a regular jazz education and exchange tour in Haiti.

The Saint Lucia Jazz Festival 2018 welcomes this new wave of Jazz vocalists, knowing that, in all probability, its expectations will be far surpassed by the actual performances of these established and rising stars.