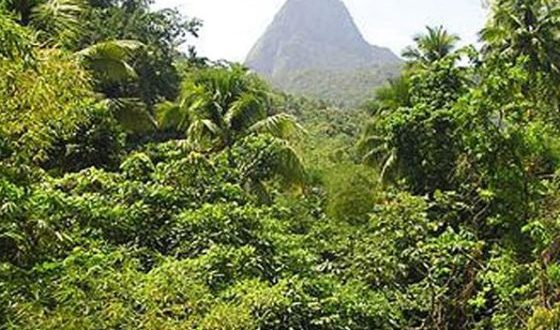 The approach encourages reforestation by enabling farmers to plant a percentage of native forest species alongside other plant species from which they can reap economic benefits.

Karl Monty Augustine, Research Officer in the Forest and Lands Department, said the multifaceted approach was developed out of necessity.

“One of the reasons was as a result of the damage caused by Hurricane Tomas in 2010. Both forested lands and active farms were impacted. Another reason was the need to rehabilitate Saint Lucia’s riverbanks. This approach gave us the ideal opportunity to plant trees that will have a dual impact—not just for restoration and stabilization, but with the added benefit of being able to harvest a crop or fruit. So now, with the potential for economic gain, farmers are more likely to conserve their forests because they not only offer protection but are also a source of income.”

In the past, farmers were not always receptive to the concept of reforestation due to an approach that promoted monoculture, but they now welcome the idea due to the ability to diversify, Mr. Augustine said.

“As a forestry department we used to try to reinstate just forests, but that led to conflict with the landowners. We later found that when they had a choice of what to plant—while they must plant a percentage of forest species—they could also plant other species that could be economically beneficial or that they would like to consume but haven’t seen in a long time.

“This approach turned out well. The farmers were very receptive. I think they were ready for some of those changes because they were able to witness firsthand the destruction to their lands happening every year. In addition, while some had cleared their lands to cultivate bananas because it was previously the cash crop, it didn’t last forever. Now, they’re no longer banana farmers, but also no longer have other crops like oranges or cocoa.”

Another benefit to the diversified approach is the reimplementation of once popular indigenous species, said Virginie Chris Sealey, Forestry Officer in the Forest and Lands Department.

“The aim of the department is to develop agroforestry. Agroforestry is the simultaneous planting of woody trees on the same land units as agricultural crops. In the past most of our land was not covered, and in an effort to provide fast-growing forest cover we planted mainly timber, but we are slowly shifting to agroforestry. This promotes not just reforestation, but will also serve to reintroduce rare indigenous plants and fruits. All in all, we’re looking at promoting what is indigenous to our country.”

The website academia.edu stated that reforestation helps mitigate climate change; while the use of native mixed species has “a higher potential to reverse biodiversity loss” and aid the development of “a variety of habitat structures that promote colonization by native plants and animals.”