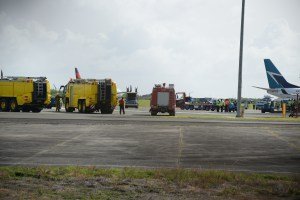 A Caribbean Airlines flight was forced to land at the Hewanorra International Airport [HIA] in Vieux-Fort on Sunday July 9.

According to HIA sources, the pilot reported an engine fire before requesting clearance to activate emergency landing procedures. 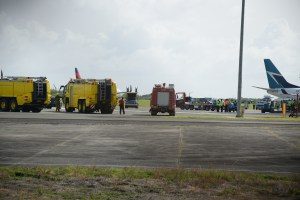 The flight, carrying more than 60 passengers, landed safely on the HIA tarmac shortly after 3 pm.

First responders at HIA were alerted and responded promptly to the emergency. No injuries were reported.

Currently, the St. Jude Hospital, the primary healthcare facility in the south has been housed at the George Odlum Stadium since the original building was destroyed by fire in September 2009.

To date, conditions at the makeshift medical facility have deteriorated significantly raising questions about the capacity to manage large-scale medical emergencies. 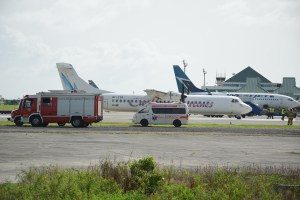 2017-07-11
Previous Two Swimmers to Represent St. Lucia at the CYG 2017
Next “No Comment” –Jimmy Henry tells HTS but, Ag Police Commissioner revealed, ‘no investigation’ into the Agriculture Minister