Home / News Updates / Encouraged by positive economic outlook, Prime Minister to Saint Lucians: “We must all stay the course!” 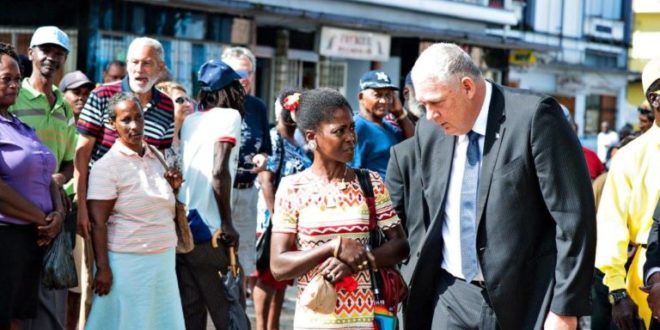 Encouraged by positive economic outlook, Prime Minister to Saint Lucians: “We must all stay the course!”

[Press Release]  With Saint Lucia starting to show positive signs of an uptick in the economy and a slight downturn in unemployment figures, Honourable Prime Minister Allen Chastanet in his Buget Address called on citizens to “stay the course.”

The country was tuned in as the Prime Minister presented the Appropriation Bill and his Budget Address 2018/2019 on Tuesday evening. The Prime Minister established a clear contrast between what obtained prior to and in 2016 which was marred by high debt, low growth, high unemployment.

“The country was over taxed and there was a loss of confidence by investors, by our own private sector and indeed, by the people of Saint Lucia,” the Prime Minister also noted. “The economy had stagnated. We knew that we would have to be bold and innovative if we were going to turn things around.”

In the face of doubt and critism, however, the Government has stuck to the vision and plan and “this Government is focused on the realization of tomorrow.”

The Prime Minister noted such Government initiatives such as the reduction of Value Added Tax (VAT) and the restructuring of the tax burden such as the tax on fuel and its deployment to road maintenance and repairs has directly benefitted those who pay the tax.

“Similarly, with the airport tax. The people who use the airport will benefit from improved facilities. The taxes are therefore more targeted,” he noted. The Prime Minister also announced that for 2018, the Government was proposing no new taxes.

“Preliminary figures for 2017 indicate that the economy has started to grow again by the notable margin of 2.5%. However, I wish to repeat, it is imperative, that we remove the impediments to further growth. If we do not accommodate growth through investment it will be temporary, unreliable and therefore unsustainable.”
The Prime Minister attributed the country’s growth largely to a strong recovery in the tourism sector and increased activity in construction, wholesale & retail and manufacturing sectors with positive spin-offs on other sectors.

When it came to the outlook for 2018 the Prime Minister said it is anticipated continued growth in 2018.

“We have seen renewed investor, business and consumer confidence in Saint Lucia’s economy. Several foreign direct investment projects in the pipeline are at an advanced stage and are expected to come on stream in 2018.”

The foundation for growth has been laid, noted the Prime Minister. “It is now time to take the next step in “Building a New Saint Lucia.” The Prime Minister said that during the budget cycle one of the major areas the Government would be focused on was investing in people.

“Our Government inherited an economy and country in need of urgent attention towards improved stewardship and greater focus. This has forced our Government to make a number of difficult decisions from inception, all of which have been made with the aim of creating a better Saint Lucia for all. There are still many tough decisions to be made in the future and I would ask all Saint Lucians to bear patience as our labour and sacrifices, will soon begin to bear even more fruit.

“We are on the right track, but we must all stay the course to achieve success!” said Prime Minister Chastanet, adding that, “Over the next three budget cycles, our Government will invest over $1 billion dollars in capital expenditure in order to construct new and rehabilitate existing infrastructure.”

The confirmed public sector projects include:

The Prime Minister was also happy to report that the Government was at an advanced stage in finalizing the financing for the construction of the Halls of Justice, police headquarters and Gros-Islet Police Station.