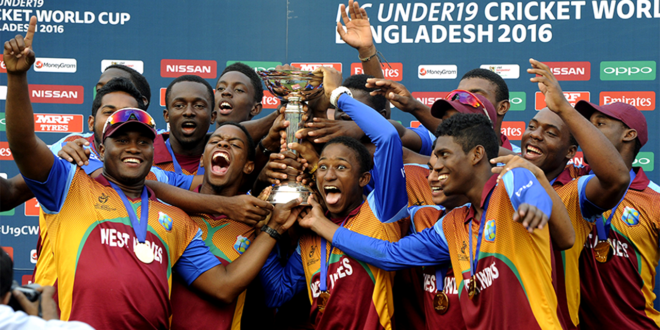 Wicketkeeper-batsman Emmanuel Stewart and batsman Kirstan Kallicharanhave been named captain and vice-captain respectively of the West Indies Under-19s squad for the upcoming 2018 World Cup in New Zealand. Both players were part of the squad that won the title in 2016: Stewart did not play a match, while Kallicharan was picked for only two games.

Nine players in the 15-man squad were part of the team that toured South Africa and Zimbabwe for limited-overs series in July this year. West Indies U-19s won both series, beating South Africa U-19s 3-2 and Zimbabwe U-19s 2-1. Bhaskar Yadram, the 18-year-old Guyana batsman, was the leading run-getter for West Indies U-19s on that tour, while left-arm spinner Jeavor Royal was the joint-highest wicket-taker for the side, with 12 dismissals. Left-arm spinner Joshua Bishop, who also took 12 wickets on the tour, has been named one of the three reserve players, along with Brad Barnes and Javier Spencer.

The team and the reserves will participate in an 11-day training camp in St Kitts and Nevis. The team is scheduled to depart on December 28 and will undergo a one-week training camp in New Zealand prior to the start of the tournament. West Indies U-19s are in Group A, alongside South Africa, New Zealand and Kenya, and will begin their title defence against the hosts on January 13. The top two teams from the four groups will advance to the Super League, while the remaining eight teams will feature in the Plate competition, with the final scheduled for February 3.

West Indies U-19s coach Graeme West admitted the side was younger than the team that went to Bangladesh but backed the team’s established batting group.

“It’s an exciting time for these guys, now that they’ve discovered they’re going to be going to a World Cup,” West said. “It’s a bit of a younger side than the last one we took to Bangladesh. However, we have a very established, experienced batting group, with the likes of Kirstan Kallicharan and Emmanuel Stewart who went to the last World Cup.”