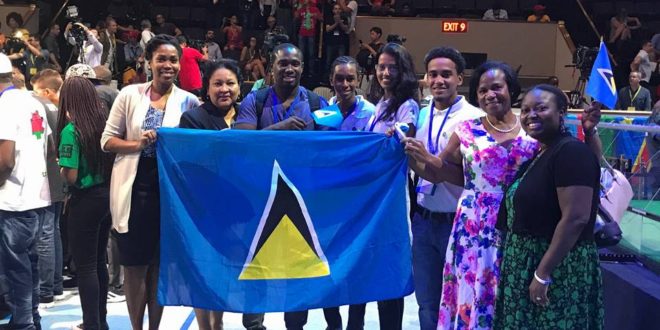 The Embassy of Saint Lucia in Washington, DC would like to congratulate Reshul Narhari, Keeghan Patrick and Shergaun Roserie (Team Saint Lucia) on a job well done at the FIRST Global Robotics Challenge! The three students, all hailing from the Division of Arts, Sciences and General Studies of the Sir Arthur Lewis Community College (SALCC), took their learning in Science, Technology, Engineering and Mathematics (STEM) to the next level as they competed with teams from nearly 160 countries. The event was held from July 16th-18th, 2017. 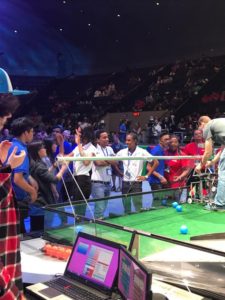 Access to clean water was the focus for the inaugural FIRST Global Robotics game which presented participants the opportunity to experience how we need to cooperate as a global society to solve the water crisis. Despite cultural and language barriers, teams from around the world joined forces to showcase that their knowledge and passion for STEM can produce much needed solutions.

Under the guidance and coaching of Mr. Loewenvell Polius, Software Engineer in the Ministry of Education, Team Saint Lucia was able to put their best foot forward, granted that they only had less than 2 months to build their robot and prepare for this exciting event. Team Saint Lucia’s final match of the the competition saw them working together with Taiwan (Chinese Taipei) and Suriname against Belarus, Panama and Bermuda. Saint Lucia, Taiwan and Suriname emerged victorious in that match. 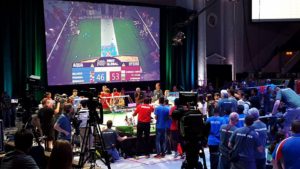 Mr. Polius, noted the need to develop awareness of STEM learning and robotics in Saint Lucia from a secondary school level. He also alluded to the need to encourage more young women in the pursuit of this much needed skill.

As for team Saint Lucia, Ms. Nahari expressed how this “eye-opening” experience allowed her to see herself as being a part of the bigger picture. The competition has further inspired her to mentor others in Saint Lucia to pursue STEM education.

The 2018 FIRST Global Robotics Challenge will be held in Mexico.