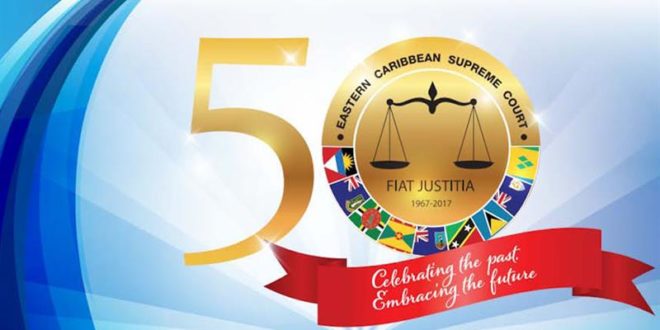 The ECSC 50th Anniversary Exhibition will be held in collaboration with the OECS Commission, the Eastern Caribbean Telecommunications Authority (ECTEL), and the Saint Lucia Diabetes and Hypertension Association (SLDHA).

An invitation to view the weeklong exhibition is extended to all citizens, residents and visitors. The event, held under the theme “Celebrating the Past, Embracing the Future,” will take place from Oct. 9 -13, from 9 a.m. to 4:30 p.m. daily. The main purpose of the exhibition is to give the people of Saint Lucia a better understanding and appreciation of the inner workings of the Eastern Caribbean Supreme Court.

Among the many exhibits will be the works of the Rt. Hon. Sir Vincent Floissac, former Chief Justice and President of the Court of Appeal of the Eastern Caribbean Supreme Court, having served in that capacity from Nov. 1991 to July 1996.

Members of the legal fraternity and the public will also benefit from a live tutorial on how to successfully navigate the Eastern Caribbean Supreme Court’s website.