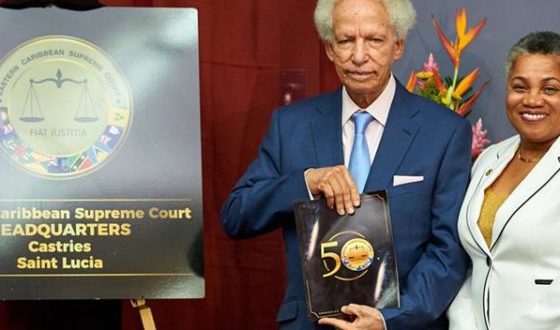 The event gave Her Ladyship an opportunity to personally thank everyone who contributed to the yearlong celebrations of the court’s milestone anniversary celebrations. Additionally, Her Ladyship also took the opportunity to assure the members of the legal fraternity present that the Court will do everything possible to embrace the use of technology so that justice can be dispensed in a timely and efficient manner.

However, Her Ladyship lamented about the limited and often inadequate resources allocated to the court and asked everyone present to be patient and continue to give the court their continued support as it serves the citizens and residents of the OECS by administering and delivering the quality of justice that they deserve.

Attendees were treated to a video highlight of the 50th Anniversary events held in all member-states and territories. The event was also used to launch the ECSC’s future logo and the 50th anniversary Commemorative Magazine.

Immediately after the closing ceremony, there was a cocktail reception where the lively and appreciative gathering, took the opportunity to mingle and socialize as the curtains officially closed on the celebrations.