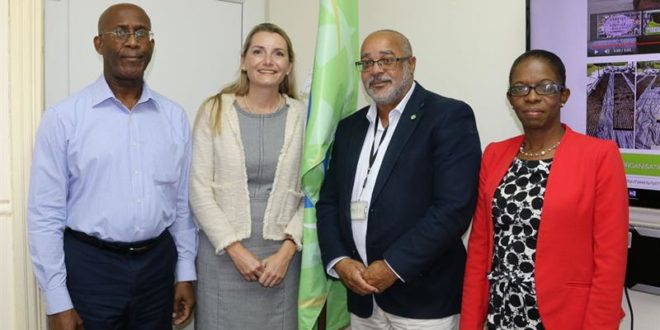 (PRESS RELEASE) – Regional Envoy of the Kingdom of the Netherlands to the Caribbean, Her. Excellency. Ms. Liesbeth Mol, paid a courtesy call on the Director General of the OECS, His Excellency Dr. Didacus Jules on Jan. 25.

In the main, the meeting focused on viable avenues of cooperation between the Kingdom of the Netherlands and the OECS, particularly in the area of disaster preparedness, giving due consideration to the lessons learned during the past hurricane season.

Ms. Mol conveyed the Dutch government’s strong commitment to support small island developing states and to deepen relationships with the countries in the region.

Dr. Jules expressed gratitude to the Kingdom of the Netherlands for the significant and timely assistance extended in the aftermath of the hurricanes and noted the importance of deeper relations with the Dutch islands, given their capacity to assist the Caribbean Disaster Emergency Management Agency (CDEMA) as critical first responders in the event of natural disasters.

“It is important that we pre-position assets in preparation for disasters,” Dr. Jules said. “Our predictive ability is a very important, and often under-considered aspect of disaster preparedness.”

The Director General noted that the Organization has been working towards a Climate Smart Coalition, with key players in the public and private sectors, in an effort to streamline post-disaster processes, such as the coordination of aid, and the legitimacy of disaster relief funds.

The meeting also discussed the possibility of membership of the OECS for select Dutch territories, increased intra-regional trade opportunities and the sharing of expertise in the fields of renewable energy, and climate resilience.