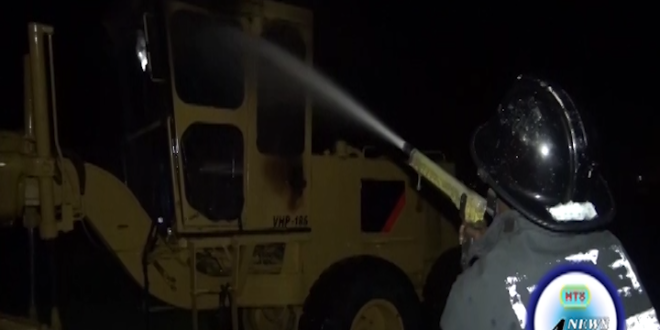 Sources tell htsnew4orce that investigations indicate that foul play is suspected in the construction equipment fire at the DSH site, which gutted the passenger cabin of a grader.

According to sources, it is suspected that diesel was poured on the engine of the heavy-duty equipment.

The cab of the grader incurred considerable damage.

Firefighters responded to reports of the mysterious fire at the DSH horserace track construction site in Vieux Fort, at around 8:45pm on Sunday January 14th.

The proposed multi-billion dollar DSH pearl of the Caribbean project is located near Beausejour, in Vieux Fort. According to sources, the vehicle’s motor battery was disconnected at the time of the blaze.

Work at the construction site was halted due to a legal dispute with a nearby landowner.

However, speaking to reporters on Monday, Prime Minister Allen Chastanet indicated that some headway is being made on the development.