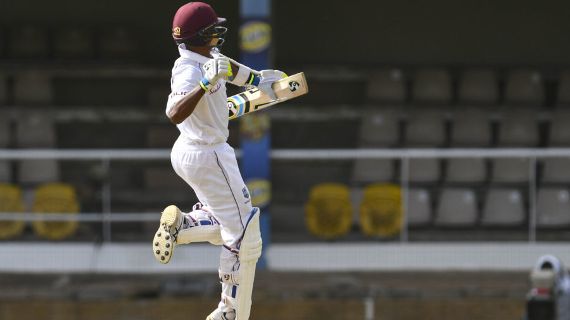 For 325 balls, Shane Dowrich resisted. It wasn’t pretty work. Most of it was defence, seeing out the swinging new ball in the morning, then deadbatting the turning deliveries from the spinners in the afternooon. But for West Indies, Dowrich’s fight, and the 70-plus partnerships he forged with Devendra Bishooand Kemar Roach were invaluable. From 145 for 5, the hosts dragged themselves to 414 for 8 – a score Jason Holder felt comfortable enough to declare on. Then their quicks brought the fire. In the 10 overs they had at Sri Lanka before stumps, they had the batsmen jiving and jerking – Shannon Gabriel consistently breaching the 140kph mark. They were rewarded with three wickets, and consequently, a firm grip on this match.

Sri Lanka, remember, are playing with only six specialist batsmen. Dinesh Chandimal survived the 31 balls he faced before stumps. He had Roshen Silva for company at the end of the day. If Sri Lanka are to get close to West Indies’ score in this innings, these two batsmen, along with Niroshan Dickwella who is to come next, will have to produce substantial scores.

But it was to Dowrich that the day belonged. Having resumed on 46 in a rain-curtailed first session, he reached his half-century with a boundary off the third ball of the day, but then continued batting with caution, as he had late on day one. Largely, he waited for the shorter balls to venture his more aggressive strokes, the majority of his runs coming on the legside. Meanwhile, at the other end, Bishoo scored a few early runs off the outside edge, and eventually settled into a rhythm himself.

Theirs was not hair-raising batting, but it ground Sri Lanka down. Suranga Lakmal was the best of the visitor’s bowlers, consistently beating the bat in the early overs, before later preventing runs and building pressure. The others, though, could not maintain the standard. The spinners were comfortably negotiated, partly because this pitch had not begun to take turn yet. Lahiru Kumara bowled a threatening delivery occasionally, but Lahiru Gamage was at times a little wayward, even on the occasions when he found some movement off the pitch.

Dowrich had been in no hurry to reach triple figures, spending 42 balls in the nineties. But after he crossed over to triple figures on the stroke of tea, West Indies’ scoring rate began to improve. Roach hit the spinners down the ground, and found plenty of singles into the outfield, as he progressed to 39 before drilling Kumara aerially to mid off. By the time they declared, with just under an hour left to play, West Indies’ sixth, seventh and eighth wicket parnterships had yielded 90, 102 and 75 respectively – Bishoo the best among the lower order batsmen, seeing out 160 deliveries while hitting 40 runs. Sri Lanka had once been hopeful of knocking the hosts over for less than 200 at one stage. They would instead have to reply to a formidable score.

And they could not have begun worse. Spotting a wide ball from Roach, Kusal Perera threw his bat first ball, and because he had not accounted for the away movement, managed to only toe-end that delivery to backward point. Kusal Mendis, the other opener would not last much longer, edging Gabriel to Holder at third slip in the fourth over. Angelo Mathews should have been dismissed next ball, but Holder spilled a much simpler chance than the one he had just snaffled. No matter. Gabriel peppered Mathews with bouncers, once hitting him on the back of the helmet as he nce attempted to duck. Clearly rattled by this barrage, Mathews failed to last until stumps, eventually edging holder himself to the slips. There was a little contention over that dismissal, as to whether Holder had overstepped, but the replays did not discern definitively either way.