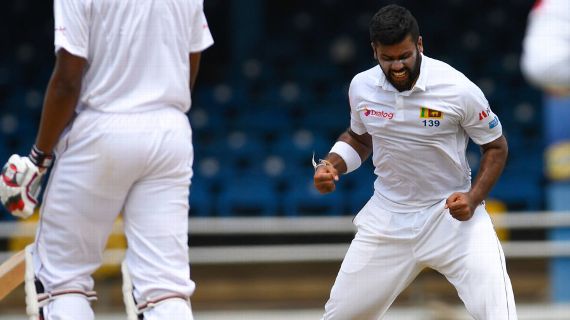 Suranga Lakmal moved the ball skillfully in the morning, and Lahiru Kumarabowled aggressively all day, but a 90-run sixth-wicket stand between Jason Holder and Shane Dowrich ensured the hosts emerged from day one with some credit. They are 246 for 6, at stumps, having progressed cautiously through the afternoon and evening sessions. That the most reticent batsmen finished as the day’s top scorer is fitting – Dowrich’s 46 not out has come off 133 deliveries. With him at the crease at the end of day was Devendra Bishoo, who was scoreless off 32 balls.

Sri Lanka’s bowlers were largely disciplined even through the wicketless spells, and despite the Trinidad heat, but the team may have another problem. Having finished six overs short of their quota for the day, captain Dinesh Chandimal is now at risk of ICC censure. This, despite having two specialist spinners in the XI. Dilruwan Perera and Rangana Herath delivered 32 overs between them.

On what was at times a slow-moving Test match day, Kumara produced the most excitement. He was erratic right through, often firing balls way outside off, or down the leg side. But as he regularly breached the 140 kph mark, he could also be dangerous on the occasions he was on target. His first wicket, near the end of the morning session, was that of Kieran Powell, who had his leg-stump uprooted by a swinging delivery that took a ricochet into the stumps. Later, in the afternoon, Shai Hope was caught gloving a ball down the leg side. His final victim was Holder, who attempting to flay a full, wide delivery through the offside, managed only to get an edge to the keeper – a fact that was only revealed after Sri Lanka had asked for a review. Easily the least disciplined of Sri Lanka’s bowlers, Kumara ended the day with 3 for 57 off 18 overs.

Although the pitch appeared to be good for batting after lunch, only Hope truly seemed at ease at the crease. Having arrived with the score at 40 for 2 in the 12th over, Hope batted positively. The pull shot was a favoured stroke of his during the innings, as he routinely rocked back to nail short balls through midwicket. A few gorgeous drives, and many assured defensive strokes thrown in, he appeared set for a big score, but lost some momentum during the lunch break. Though he and Roston Chase made 54 runs together and survived for over an hour after the lunch break, they did not manage to put Sri Lanka’s bowlers under significant pressure. Eventually they were out in quick succession – Chase the batsman to concede a wicket to spin in the day, when he played back to a Herath delivery that he should have come forward to, and wound up edging the ball, for Angelo Mathews to take a sharp catch at slip.

The stand between Holder and Dowrich had begun slowly, but eventually achieved some kind of rhythm. By now, conventional swing had long since disappeared, and Sri Lanka’s quicks did not seem able to generate noticeable reverse swing. The spinners turned the occasional delivery, but did not beat the bat often enough to suggest they were a threat. And so, Holder and Dowrich set about picking the gaps with risk-free strokes, as they reserved their big shots for the truly bad deliveries. Neither batsman favoured either side of the pitch; both appeared capable of scoring anywhere in the ground.

Just as they threatened to turn their fighting stand into an innings-defining one, Kumara made the breakthrough, to the relief of his captain. Sri Lanka had been trying hard for that wicket – twice dropping catches in the slips through the course of the partnership. They took the second new ball at earliest opportunity, and thanks to their slow over-rate, will have a ball that’s only four overs old when they arrive on day two.