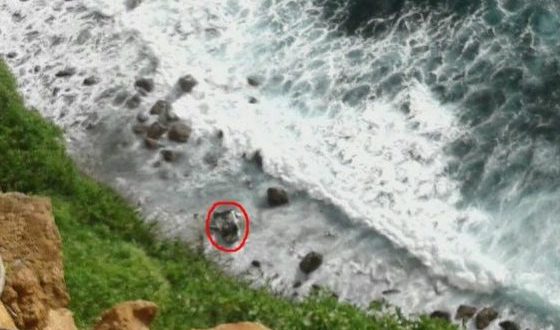 A vehicle ran off the road and plunged over a cliff in Dominica Sunday morning, killing all five people on board, reports say.

The accident reportedly occurred around 7 o’clock in Vieille Case, in the northern part of Dominica.

Reports say the vehicle fell into the sea after running over the cliff. All the victims are reported to be men.

The circumstances surrounding the accident was not immediately clear.

Photographs from the scene show debris in the waters below a tall mountain, with onlookers standing on a side.

The area where the accident occurred is represented in parliament by Prime Minister Roosevelt Skerrit, reports Dominica News Online.

Prime Minister Skerrit offered his condolences and said he spoke to one of the victims the night before.

“Just last evening I spent a considerable amount of time with one of the young men as we met with the young people from my constituency. In fact, he gave the welcome address at the forum. My thoughts and prayers go out to the families of the deceased. We all share in the pain and suffering. For me personally, it can’t get closer,” Skerrit said.

2017-08-06
Previous Five from Soufriere awarded scholarships to the US
Next Recovered Body Identified as 16-year-old John Baptiste Flemius, Drowning Suspected as Cause of Death