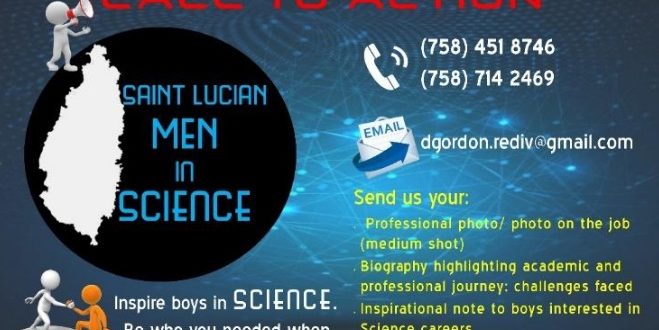 [Press release] Science and Technology (S & T) plays an integral role in our pursuit of sustainable development in Saint Lucia, which is led by the Department of Sustainable Development (DSD).

All countries, and in particular developing countries like Saint Lucia, need a much larger scientific and technological workforce to ensure sustainable socio-economic development.

For International Women’s Day 2018, DSD began the celebration of the achievements of Saint Lucian women in Science as well as the progress Saint Lucia has made towards gender equality (Sustainable Development Goal Number Five), through features in the media emanating from the Facebook page “Science & Technology in Saint Lucia” – https://www.facebook.com/STinSLU/.

Based on the positive feedback, DSD would like to further increase the recognition of outstanding nationals in the scientific and technological arena by including features of Men in Science. This will be a continuation of the documentation and promotion of public awareness of the contribution, and often pioneering efforts of Saint Lucians in various science-based and technological disciplines and professions.

Minister for Education, Innovation, Gender Relations and Sustainable Development Hon Dr. Gale Rigobert hopes that this venture will play a significant role in inspiring boys to consider advanced studies and careers in the scientific and technological fields.

DSD would like to call Saint Lucian Men in Science to action, both here and abroad, engaged in pure or applied research, innovation and invention, education, policy making, planning and management, in both public and private spheres to inspire boys in Science. These areas are crucial to ensure the welfare and continued improvement in the quality of life of Saint Lucians, and the Caribbean region by extension.

Interested persons are invited to contact the Science and Technology Officer within the Department of Sustainable Development via email dgordon.rediv@gmail.com or phone (758) 714-2469. Submissions will be released on Facebook page, initially, upon receipt.