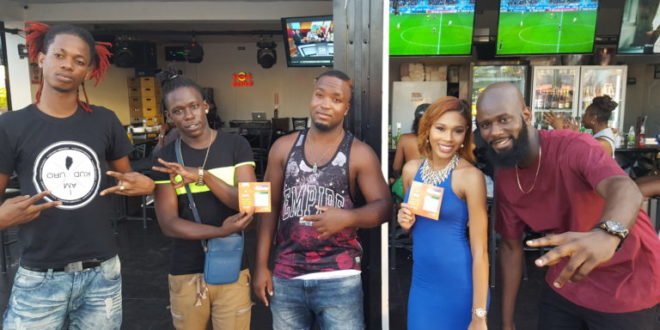 Mighty & Subance, Blackboy and Hollywood HP after a TV interview

Saint Lucia’s Soca music and by extension Saint Lucia’s carnival, was given a major boost recently, following the impact which the music had during Trinidad’s carnival 2018.

Leading the grand charge for the music, was the popular Dennery Segment, a new sub-genre of Soca music, with its infectious syncopated drum and bass, Afro-Caribbean rhythms and a fusion of English and French Creole lyrics.

Cognizant of the impact the music was having and in response to a call from some of the artistes, The Government of Saint Lucia embraced a proposal to assist some of the performers in the promotion of their music during Trinidad’s carnival. The contingent also helped to promote Saint Lucia’s carnival during their several appearances and interviews.

According to Local Government and Culture Minister Senator Hon. Fortuna Belrose, whose Ministry played a pivotal role in supporting the artistes, the backing was seen as quite timely and necessary.

“We’ve seen the strides and waves that music has been making across the region and indeed across the globe and it has been quite a phenomenon. But I think in terms of recognition and visibility, the artistes themselves have not received enough of that and so we were happy to embrace a Dennery Segment tour to Trinidad for their Carnival”, Belrose explains.”

The artistes, who were part of the tour were Subance & Mighty, Blackboy, Matta and Hollywood HP who performed at several events leading up to Trinidad’s carnival and were all very well received. They were also featured on several radio shows promoting their music and Saint Lucia’s carnival.

A major feature of the tour was a “Looshan Night” hosted by Hollywood HP at a Nightspot on the popular Ariapita Avenue in Port of Spain. The event featured performances by Freezy, Matta, Big C and Hollywood HP before a packed house.

The Dennery Segment Trinidad Tour was also strengthened with support from The Saint Lucia Tourism Authority and Events Company of Saint Lucia. ECSL CEO Thomas Leonce, said that his agency saw it fitting to sort of launch Saint Lucia’s Carnival in Trinidad during their carnival on the impetus of the impact of the Dennery Segment music and the presence of the artistes.

A number of Saint Lucian artistes were also on the road with Yuma on Carnival Tuesday including Matta, Teddyson John and Big C as well as the biggest names in Soca including Rupee, Destra, Patrice, Voice, Ricardo Drue and Erphan Alves among others.

The contingent is also thankful for the support received from Yuma Carnival band, the Just4Fun team and the PCD team through Campari which was the official drink for Trinidad Carnival 2018 which climaxed on February 13.