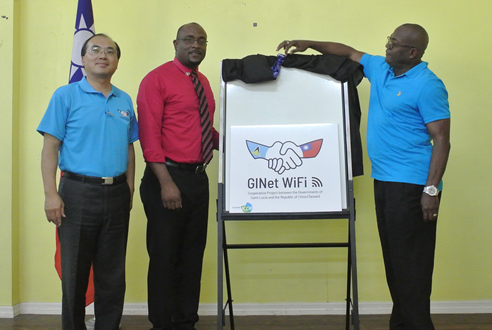 Minister Edmund Estaphane,Hon.Shawn Edward and Mr.Louis Liou, Deputy Counsellor of the Embassy of the Republic of China (Taiwan) together announced the GINet Free WIFI Service Launched in Dennery North

On behalf of Saint Lucia Government, Minister Estaphane extended his gratitude to Taiwan for contributing to the wellbeing of local people and the development of the country. He emphasized that with the project completed, it will greatly help rural residents connect to the digital world and further energize local economy.

Honourable Shawn Edward explained that the GINet project was commenced in 2015, he was pleased to see it completed on schedule.

He also recognized that people of Saint Lucia greatly benefited from all the bilateral cooperation projects between Saint Lucia and Taiwan. He urged local residents to cherish the free WIFI service and to ensure its sustainability.

Mr. Louis Liou noted that the GINet project is a major cooperation project between the governments of Saint Lucia and Taiwan, all the equipment and technology were imported from Taiwan. He also pointed out that with the implementation of the project, Saint Lucia is moving steadily towards the target set by G20 Digital Ministerial Meeting in 2017 – “All people around the world should have access to internet by 2025”.

The GINet is an island-wide internet access improvement initiative which seeks to bridge the digital divide and to provide local and wireless network areas in public zones of towns and villages across Saint Lucia. The project costs around US 4 million, established 63 Wi-Fi hot spots among five administrative districts in Saint Lucia.