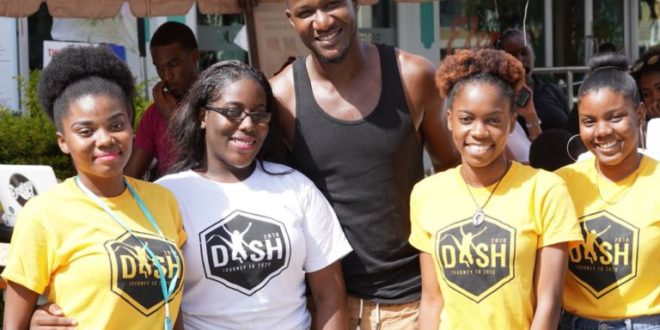 (PRESS RELEASE) – It is official, the 2018 edition of the DASH Colour Run has taken off with a projected gathering of over 2000 participants come February 25, 2018.

The event launch took place on January 27 outside the Baywalk Mall in Rodney Bay where scores of loyal DASHers gathered to take advantage of the customary early bird specials.

Saint Lucia’s own Daren Sammy paid a personal call on the DASH team of volunteers to endorse and injected some of his own capital into the initiative.

Speaking on behalf of key beneficiary – the Child Development and Guidance Center (CGDC) – Dr. Garnder Sadoo said she was for yet another year of partnership and commitment from the DASH team.

“There is no way we can possibly quantify the strength of this relationship. And the fact that these young people come together every year to volunteer their time and talents in the interest of other less privileged young people, speaks volumes to where we know we can be in DASH numbers and support this year and going forward,” Dr. Sadoo said.

The DASH Independence Run is dubbed the most colourful event on the independence calendar geared specifically towards tweens and teens and embraces island’s national colours in a safe and fun environment.

“We are through the roof with this. So many opportunities for growth and all of it in the interest of youth development and care in Saint Lucia. We are excited about our newly adopted 2020 Vision which incorporates support for athletes looking to represent our island at the Olympics in Tokyo in 2020,” Benn said. “It is going to be an exciting journey and we’re all along for the ride in colour.”

“The folks at Liive Productions Inc. approached us to be a part of the DASH team for Operations and Logistics and without hesitation we joined. We believe it is a creative interaction that The Larcher Group associates with since it connects people and communities with wholesome family entertainment. Its youth focus brings something fresh and fun and this is definitely a good opportunity for St. Lucians to put aside the stresses of daily life and just have fun,” says the Larcher Group, while inviting the public to celebrate the island’s 39th independence with DASH.

January 27th marked the beginning of weekly pop-ups and from that will continue every Saturday through to February 23rd at the Baywalk Mall under the clock tower from 9:00am to 4:00pm. Two of those pop-ups allow for early bird registration at a reduced cost. Registration can also take place at Shoe Rehab.

DASHers will make their way down to the Independence Village in Rodney Bay between Baywalk and JQ Malls where the fun continues in the most colourful of ways.