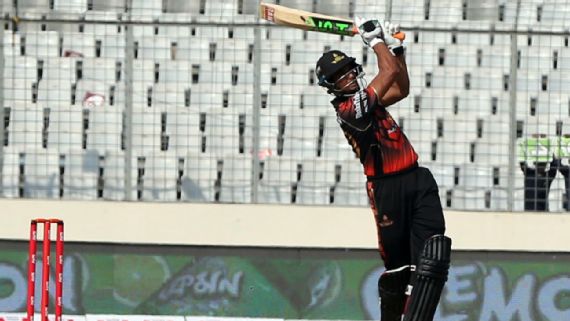 Ariful Haque smashed an unbeaten 19-ball 43 to lift Khulna Titans to their fourth win of the season from an improbable situation against Rajshahi Kings in Dhaka. With 36 required to win off 18 balls with three wickets in hand, Ariful hammered all 36 runs to consign Rajshahi to their fifth loss in seven games this season.

Chasing 167, Khulna were led by captain Mahmudullah’s 44-ball 56, which featured eight fours and a six. His dismissal though, in the 14th over with 60 runs still to get, sparked a collapse that saw Khulna slip to 128 for 8, before Ariful’s match-changing cameo.

Rajshahi had slipped to 21 for 3 in three overs, after they were asked to bat first. But Dwayne Smith, playing his first game of the season, and Mushfiqur Rahim kept attacking. Smith was particularly effective on the leg side, frequently pulling and heaving boundaries in the arc between square leg and long-on. He struck seven fours and four sixes in his 36-ball 62.

Mushfiqur hit a 33-ball 55, that included four fours and three sixes, before he holed out to deep midwicket in the 16th over. From that point, Rajshahi could only add 25 runs in 25 balls to finish at 166 for 8. Junaid Khan finished with 4 for 27 in his first BPL game of the season.

A boundary an over

Mohammad Sami took two early wickets in the chase to restrict Khulna to 13 for 2. Mahmudullah and Rilee Rossouw were hardly deterred, continuing to attack to capitalise on the Powerplay. Khulna hit 13 boundaries in the first 10 overs, at least one in each over, to gain control of the game. However, they lost wickets in clumps right through their innings, as Rajshahi quickly gained the ascendancy.

With 36 to win and Junaid Khan at the other end, Ariful was forced to hog the strike. In the 18th over, he hit three boundaries – two fours and a six – off Hossain Ali through mid-off, which cut the equation down to 18 runs off 12 balls.

He then faced all six balls of the penultimate over, bowled by Sami, taking him for nine runs, including a sweep over square leg. Smith, defending eight off the final over, erred with two straight full tosses. Ariful heaved the first over square leg for six and scooped the second for four through fine leg.