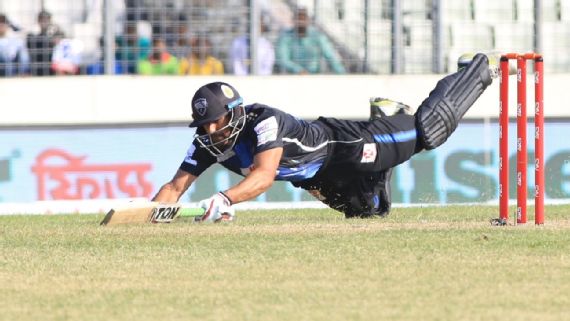 After Farhad Reza‘s impressive bowling limited Rangpur Riders to 134 for 5, Rajshahi Kings ran down the target with fluent fifties from openers Mominul Haque and Lendl Simmons. This was Rajshahi’s first win of the season in three attempts, and Rangpur’s second successive loss.

Rangpur became the first team to opt to bat first this season, but most of their batsmen struggled on a two-paced pitch. Reza struck twice in his first over and was complemented by the frugal Mehidy Hasan. After being reduced to 33 for 3 in four overs, Rangpur recovered with a measured fifty from Ravi Bopara.

But Mominul and Simmons, playing his first match of the season, added 122 runs for the opening stand and ensured the chase was a cruise. Both Simmons and Waller fell in the 16th over, before Rony Talukdar sealed the win with a pulled four in the next over.

Reza’s first over – the fourth of the innings – contained a mighty six, a dropped catch, and the wickets of Adam Lyth and Mohammad Mithun. Reza started the over with a leg-side wide, and watched Mithun charge out and lift the next ball over the long-on boundary. Reza then could have had Mithun caught behind with an outswinger, but Mushfiqur Rahim, the stand-in captain, shelled the chance, and the ball rolled away to the third-man boundary. Reza found success when he had Adam Lyth holing out to cover with his fourth legitimate ball. He followed it with the wicket of Mithun to round off an eventful over.

Bopara, too, could have been dismissed on 2 when a nip-backer from Reza shaved the outside of the off stump but the bails stayed put. Bopara then staged a slow recovery with Shahriar Nafees, adding 49 for the fourth wicket in nine overs. Nafees, who needed 26 balls to find the boundary, fell for 23 off 31 balls in the 13th over, but Bopara went onto bring up a fifty off 49 balls.

He came into his own when he hit three boundaries in the last two overs of the innings. Ziaur Rahman assisted him with an unbeaten 11 off 10 balls. In all, Ranpur took 44 off the last five overs to give their bowlers something to bowl at.

Playing his first match of the season, Simmons kickstarted the chase with two boundaries in three balls of Lasith Malinga. Mominul then started to time the ball well, hammering sixes over long-on off Mashrafe Mortaza and Nazmul Islam. Simmons survived a chance in the 11th over when replays showed his shot towards long-off fell short of an on-rushing Lyth. Mominul, too, had been reprieved on 1 when Nazmul had dropped a sitter at deep square leg, leaving Mashrafe Mortaza irate.

Mominul cashed in and went onto hit his seven half-century in T20s. He reached the landmark with his third six – clean swing over the long-on boundary. Earlier in the same over, Simmons had blasted one over mid-off and helped bring up the century stand. Mominul struck four fours and the three sixes in his 44-ball 63 not out, putting Rajshahi on board.

There was a bit of miscommunication. The coach [Tom Moody] told me to field or bowl first. I heard bat first. I think we should have bowled first on this wicket.”
Rangpur Riders captain Mashrafe Mortaza