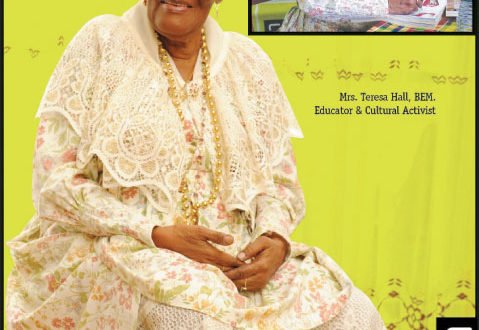 By extension, the Board of Directors and staff of the CDF express condolences to the arts and cultural fraternity on the passing of a devoted lover of Saint Lucian culture – song, dance and traditional dress. Saint Lucia has lost a passionate and dedicated daughter and the nation mourns the passing of Mrs. Theresa Hall.

Born in Castries on November 7th, 1930, Theresa Hall attended the Ave Maria Girls School and upon graduation, taught there for twenty (20) years. Her contribution to national development included the organization of arts and cultural events including The Primary School Quadrille Festival and the National Youth Pageant. Mrs. Hall was a teacher at the Castries Comprehensive Secondary School, where she taught Arts and Craft and founded the school’s first dance group. In 1990, one of Saint Lucia’s premier dance groups, The Helen Folk Dancers, was formed by Ma Hall, as she was affectionately known.

Theresa Hall has been recognised by many individuals and organisations for the extraordinary contribution which she has made towards nation building. In 1995, she received the island’s highest award, The Piton Gold Medal (SLPM) and in 2007 she was the recipient of the British Empire Medal (BEM).

May her family, friends, acquaintances and all who loved her, find the strength to cope with her passing. Let her memories and the virtues which she shared during her time with us comfort us as we each work towards leaving behind a legacy to be proud of.