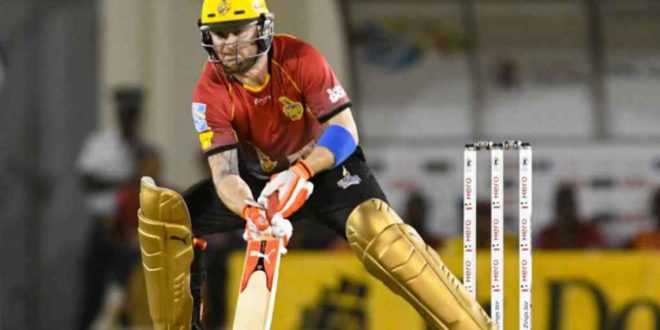 Brendon McCullum brought out his array of shots.

St. Lucia Stars, formerly known as Zouks, received a baptism by fire at the hands of the Trinbago Knight Riders in the CPL 2017 opener in Gros Islet. Brendon McCullum and Colin Munro blasted half-centuries in an unbroken second-wicket century stand as Knight Riders razed down the 133-target with 56 balls to spare.

The Daren Sammy-led outfit were ousted by Knight Riders by five wickets in the first elimination playoff last year. Any hopes of avenging that season-ending defeat were dashed by Shadab Khan, the Pakistan leg-spinner, on CPL debut.

He picked 2 for 15 – the effort earned him the Player-of-the-Match award – as Stars limped to 132-9. On a true surface with even bounce, it was far from enough.

Andre Fletcher triggered a pulsating start, hitting Khary Pierre, the left-arm spinner, for three successive fours in the second over, but Shadab’s introduction brought the runs under check. Fletcher, looking to whip one by walking across, only to see Shadab cleverly fire the ball in, was trapped plumb in front for 26, which would be the highest score of the innings.

Two overs earlier, Jesse Ryder, returning to competitive cricket for the first time since March, struggled for timing and holed out to deep square leg in a desperate attempt to bring out the big hit. It left a lengthy tail with plenty of work to do at 81 for 5.

A thin middle-order left the St Lucia franchise vulnerable on a number of occasions last year. Shane Watson played a key role in propping them out of trouble. On a day when they needed him, he was forced to sit out after a calf injury flared up on the long flight across the Pacific.

Watson’s absence exposed the lower order to Dwayne Bravo’s slower variations – including the dipping full toss. A slower ball foxed Rahkeem Cornwall to make it 95 for 6 in the 16th over. He struck again in the final over to claim Jerome Taylor. A failure from Darren Sammy left Kyle Mayers with the unenviable task of marshalling the lower order. He blasted two late sixes to make 15-ball 23 to lift them past 130.

McCullum didn’t cross 50 once last season. Here, he did so but not without luck – his first scoring shot was a boundary off an inside edge that flew past leg stump. Then there was a close lbw shout off Mitchell McClenaghan as an inswinger appeared to have pinned him on the toe. Replays indicated he got the faint bottom edge.

After the double-dose of good fortune, McCullum pounded the leg side for a series of sixes. The first came off Obed McCoy, with a casual flick over square leg. Cornwall was next in line, muscled over long-on for another in the fifth over. An attempted bouncer from McClenaghan in the sixth over landed beyond the square leg boundary; Knight Riders had raced to 57 for 1 by then.

Munro showed he wasn’t here to just watch the McCullum show, balancing out the wagon wheel by peppering the off side boundary. Then he followed McCullum’s lead by taking Sammy over midwicket twice in three balls for a pair of sixes in the seventh over.

Sammy nearly nabbed him for 48, but saw Mayers make a mess of a straightforward chance at long-on, the ball cannoning off his stomach onto the ground. It perfectly summed up a bumbling performance for Stars on the night.