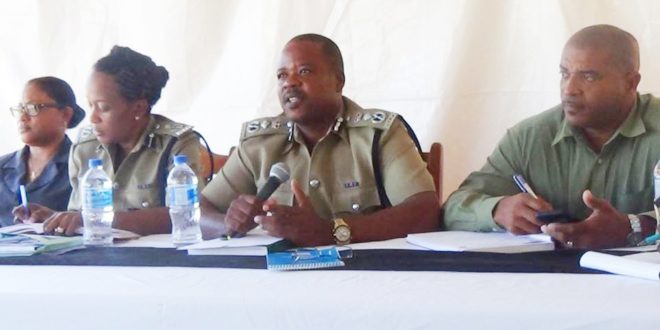 The Royal Saint Lucia Police Force (RSLPF) will undertake a Commissioner’s Town Hall Meeting at the Jacmel Community Centre on Wednesday, May 24, 2017 from 6:00 p.m.

The hierarchy of the Police has used this medium to strengthen its Community Relations throughout the island having held several successful Community Townhall Meetings in the past.

The Commissioners of Police take this opportunity to invite residents of the community to turn out in large numbers to discuss crime and Community Policing concerns in open and frank discourse. The Royal Saint Lucia Police Band will also be on hand to treat the community to several of their popular musical renditions.

The Town Hall Meeting will be followed by a series of planned school visits beginning with the Pierrot Combined School in Vieux Fort on May 23, 2017 from 9:00 a.m. Subsequently, the senior lawmen will visit the Delcer Combined School at 1:00p.m.

On Wednesday, May 24 Gazetted Officers along with other senior members of the Force will visit the Vide Bouteille Secondary School at 9:00 a.m. The curtains come down on the school visits at the Marchand Combined School on May 25, 2017 from 9:30 a.m.