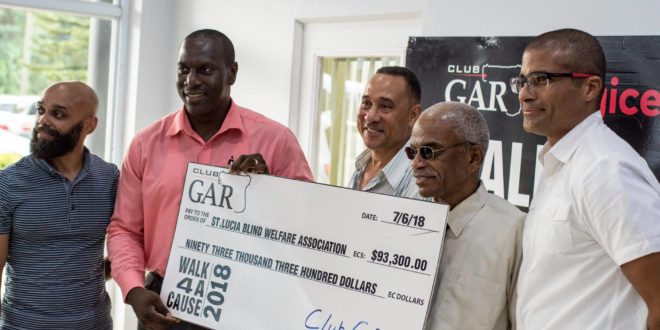 Press Release- Club GAR/Digicel Walk 4 A Cause 2018 which raised money and awareness for the St.Lucia Blind Welfare Association held its closing ceremony on Thursday 7th June 2018 at the J Q Motors showroom Choc Castries. The Closing Ceremony was an opportunity for Club Gar to report on the Walk and handover the funds raised from the charitable event.

Walk 4 A Cause 2018 was the most successful of the 5 annual walks hosted by Club GAR. There were over one thousand one hundred participants at the Walk which took place on Sunday June 3rd 2018. Cause Captain for this year’s Walk, Gregory Joseph commented that “not only did we have the largest number of participants the response on a National level was so positive that we were able to meet and exceed our targets”. The amount that the Club intended to raise was $40,000.00 but in the end the total available to the SLBWA after all expenses was $93,300.00.

Founder of the Walk Anthony Bristol  stated that “this year’s success can be attributed to the Cause, the sterling support of our corporate Sponsors in particular our title Sponsor Digicel, the marketing efforts and hard work of our team members  and importantly resounding support and participation from the public”.

The St. Lucia Blind Welfare Association was on hand to receive the cheque represented by the recently elected President Glen Simon and Director of the SLBWA, Mr. Anthony Avril. The funds raised will be paid to the NCF for the benefit of the SLBWA who will be able to draw down on the funds in accordance with an Memorandum of Understanding between the NCF, SLBWA and Club GAR.

Club GAR introduced for the first time the Club GAR Hall of Heroes, a recognition to be given to persons who go above and beyond in service to the community and country. It was quite a surprise for Mr. Avril who was selected unanimously by the organizing committee as the first Inductee into the Club GAR Hall of Heroes.  As part of the selection for the award the Club  researches the history of the organisations and the work done by the key people therein. In presenting the award, President of Club GAR Gordon Charles commented that “What has been achieved for the Blind and Visually Impaired by the work of Mr. Avril, the individual, family, community and national impact make him most worthy of this recognition. We applaud his efforts and wish him continued good health and success in the future”.

Digicel marketing manager Yatsuri Marshall was on hand along with many other sponsors who contributed and participated in the event.