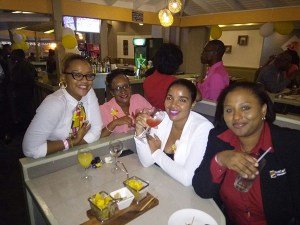 Castries, ST. LUCIA, May 26th 2017 – People were the central focus of activities to commemorate the 150th anniversary of the Canadian Imperial Bank of Commerce (CIBC) family across its international network.

Last week, CIBC FirstCaribbean International joined CIBC banks worldwide, in activities to mark the 150th milestone of their parent company, CIBC. The bank was established on May 15, 1867.

On that day this year, CIBC FirstCaribbean here, like its counterparts regionwide observed a joint Employee and Client Appreciation Day to thank employees and clients for their contributions to the longevity and success of the financial institution. 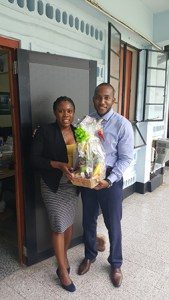 These expressions of gratitude took the form of a whole day of hospitality and entertainment at banking halls island-wide. The delivery of gift baskets to the homes and workplaces of a number of outstanding customers was a novelty for both recipients and those making the deliveries. Employees were also treated to after-work branch activities and fellowship.

CIBC has been in the Caribbean since 1920. The first CIBC branches in the West Indies were established in Bridgetown, Barbados and in Kingston, Jamaica. Branches were also opened in Port of Spain, Trinidad and Havana, Cuba, the same year.

Ladesa James-Williams, Country Manager – Southern Eastern Caribbean Islands explained that while the bank’s history in the Caribbean is not as long as in Canada, it is rich and expansive across the region.

“The 2011 re-branding of our company to include the CIBC name in ours is evidence of the importance of our bank to our parent company. Also we recognize that any celebration must affirm the two biggest contributors to our business – our clients, who are the reason we come into work every day, and our employees who serve them”, Mrs. Williams said.

“One hundred and fifty years of helping families, businesses and communities prosper and grow is an incredible milestone. It’s a special day to honour our past, as we look forward to accelerating our future,” she noted.