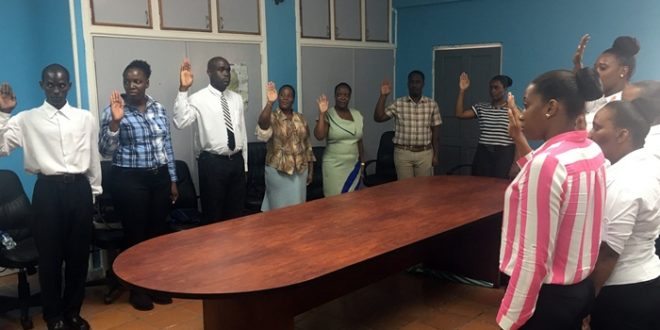 The group includes 9 women and 5 men, among who are trained security personnel.

The second consignment of city officers will not only have the opportunity to serve and protect in the City of Castries, but to also participate in a three month developmental training and appraisal program.

The new recruits will be an addition to the 13 seasoned constabulary officers and the 23 recruited last year December. Another group of 36 recruits will be appointed by the first quarter of 2018 to beef up the new batch to 50.

In congratulating the officers, Commissioner Moncherry explained that every situation should be assessed before acting, adding that the responsibility of the city police is a big one because of the powers to act and or arrest anywhere in St. Lucia.

‘’I am very delighted by this, ’’ His Worship Mayor Peterson D. Francis said.

‘’When the City Police Department was implemented, it was to help with law enforcement. My goal is to work together with the RSLPF to make things better. I know that the commissioner’s task is demanding, and I am there to assist.’’

His Worship added, ‘’this job is not because you’re unemployed but because you want to protect and serve as it is a very serious time for law enforcement.”

In closing, Mayor Francis thanked the police leadership for their efforts and continued support.

2017-12-08
Previous National Lotteries Authority ‘rescues’ Youth Fest 2017
Next Without the 203 Helpline “The suicide rate would probably be in the hundreds”: Dr. Gillard