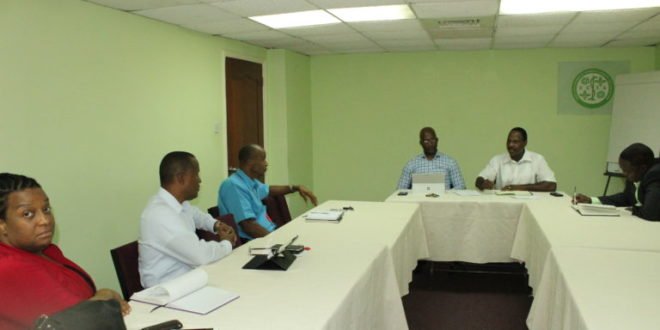 [Press Release] Seeking to ensure that crime against the commercial sector is effectively addressed, the St. Lucia Chamber of Commerce, Industry and Agriculture convened a Law and Order Committee meeting on Tuesday 9th May at its Offices on the Vide Boutielle Highway.

The meeting focused on the Committee setting an agenda for itself moving forward. However the opportunity was taken to review the outcomes of meetings between the Chamber and the Minister of National Security and the Chamber Working Group on Robberies against sales vans. It was agreed that a more proactive approach was required to address the issue of robberies against the sales vans as well as other crimes against commercial entities. As a first step the Chamber will be conducting a membership survey to assess the extent of the problem as far as crimes against businesses in general and more specifically van sales robberies.

The Chamber will continue to advocate for the development of a National Crime Fighting Plan if one does not exist and the sharing of it if there is one. The Meeting reiterated its willingness to partner with authorities in developing the integrated surveillance system in the Castries area and along the Castries Gros Islet Highway and awaits the required information from the Ministry of National Security.

The Law and Order Committee has agreed that the Chamber will be writing the Commissioner of Police on the issue of van sales robberies seeking an assertive response from the Police. The Committee was clear in that all that was required was there to be a reasonable safe and secure environment for the conduct of business and was confident that the Police was well placed and capable of addressing the matter before lives were lost, people get injured or the cost of carrying out this standard trade practice was halted due to safety concerns.

The Committee will meet again in a few weeks once they required survey information has been collected and tabulated by the Chamber Secretariat.