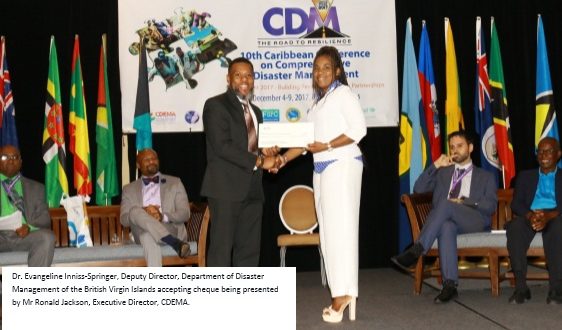 Both territories received US $70,000 each to assist with further relief and recovery efforts post hurricanes Irma and Maria.

The presentation was made to the countries during the general plenary session on Advancing School Safety in the Caribbean at the 10th staging of the Caribbean Conference on Comprehensive Disaster Management, which is being held at the Melia Nassau Hotel, The Bahamas on December 4th – 9th, 2017.

The cheque donation to both BVI and TCI were made possible by the monetary contributions received through the CDEMA’s Emergency Assistance Fund (EAF), which was launched via an online donation platform as well as direct deposits during the response and relief operation phase for both Irma and Maria. Donations were received from individuals, companies and governments.

Representatives from both territories expressed deep appreciation by thanking CDEMA and all donors for the overwhelming support to help recover and rebuild after the widespread destruction caused by the catastrophic hurricanes.

The 10th edition of the Caribbean Conference on Comprehensive Disaster Management (CDM) is being held under the theme “The Road to Resilience – Check Point 2017: Building Resilience through Partnerships”.

Over 250 delegates from across the Caribbean and the world gather to participate in discussions on disaster management and climate change issues affecting the region.

It is hoped that the conference will contribute to the enhancement of resilient capacities and partnerships to fight climate change and strengthen comprehensive disaster management activities going forward.