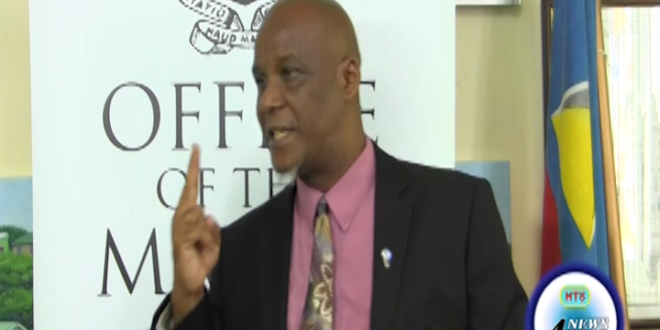 [Press Release]  The Castries Constituency Council (CCC) is shocked over the recent turn of events among a small grouping of vendors who staged a protest Tuesday morning, outside the CCC offices.

The council has led a bold campaign in recent times to clean up the capital city, making it more conducive for businesses to thrive, and for pedestrians to move around safely. Throughout its efforts the CCC has always maintained a very transparent and consultative approach.

Castries Mayor, His Worship Peterson D. Francis along with members of his management team held two very cordial meetings with the President of the Dry Goods and Craft Vendors Association to consult on the city cleanup campaign and redevelopment plans. The latest meeting was held last month.

Following the meetings, a number of decisions were agreed to;

1. Both the CCC and the Vendors Association President agreed that many metal stalls, pallets and concrete stumps left behind on a daily basis by some vendors, pose as a serious hazard and should be removed from city sidewalks.

2. The two parties agreed that the CCC would implement a Vendors Registration Programme to better formalize the operations of vendors in the city.

3. In addition to agreeing and giving support to the plans tabled, the Vendors Association President assumed responsibility to convey the decision to his members and further consult with them on the way forward.

Although flabbergasted, the Castries Mayor says he isn’t surprised as tricky and deceit has become the Modus Operandi of the Vendors Association President, to the harm of ordinary vendors.

According to Mayor Francis, it is very hypocritical and sly for the Vendors President Mr. Peter Issac to join disgruntled vendors in protesting over lack of consultation and moves to clean up the streets and sidewalks, decisions which he agreed to behind closed doors, as the vendor’s legitimate representative.

The CCC calls on city vendors to hold their Association`s President to task for his failure to convey the information and provide quality representation and leadership, while he sits comfortably with all amenities in the Vendors Arcade not doing anything to better the life of vendors on the roadsides who have to face varying weather conditions daily.

The Castries Constituency council will continue to press forward with its programmes to make Castries one of the cleanest and safest cities in the Caribbean.

The CCC takes the opportunity to reaffirm its commitment to consulting with stakeholders at all stages of development in Castries.